Ash is Back (again) in Army of Darkness: Furious Road 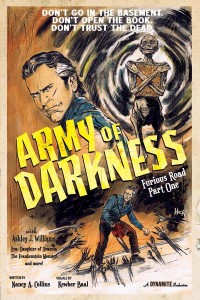 Ash is back, baby. And not just on our screens, with Dynamite Entertainment soon to release the latest entry in their Army of Darkness comic series, entitled Army of Darkness: Furious Road.

Written by Nancy A. Collins (Swamp Thing, Jason Vs. Leatherface), this new story sends Ash twenty years into the future, where the Deadites have succeeded in bringing civilisation to the brink of collapse. With their undead armies having taken over, other supernatural beings such as vampires, werewolves and witches have been forced into alliances with humans to face the threat. The only way to send the Deadites back to hell is with a ritual contained within the sacred pages of the Necronomicon, which is guarded by one Ashley ‘Ash’ Williams. A team that includes Dracula’s daughter Eva and Frankenstein’s Monster sets out to find the legendary Book of the Dead and its chainsaw-wielding guardian. 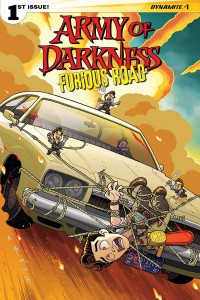 “I think Ash’s biggest appeal is that he’s just an ordinary Joe thrust into some serious Lovecraftian high weirdness”, says Collins, explaining what drew her to the series. “He is doing his best to be a hero, even though he really doesn’t want the job.”

Army of Darkness: Furious Road will be available in stores and online from March 2nd, 2016.