American readers may not be familiar with the ASBO, it’s a quintessential British punishment. It stands for Anti-Social Behaviour Order. It’s a punishment for minor offences that supposedly limits movements and types of behaviour of the offenders. It’s a kind of probation before getting into more serious trouble for breaking the stipulations set out in the ASBO. The type of restrictions might be no alcohol or not being allowed in a certain area. It’s a common punishment for typical teenage offences.

In my opinion it seems that there is a tremendous fear of teenagers in Britain, with them seen as bored, violent and remorseless. This image is propagated through the news media and through movies such as Eden Lake. As seemingly more teenagers are growing up with few job opportunities and prospects, there is the idea of gangs of youths roaming the streets looking for kicks.

Most of the books I’ve reviewed have had more than an element of the fantastical about them, but this title is very much in our everyday world. There is no supernatural element. In many ways the plausibility makes it all the scarier. Where you can comfort yourself with most horror books that the events could never happen, you don’t have that solace here.

The story follows a middle class, family man, Andrew, whose life changes through the simple act of walking past a gang of teens. The teens are led by Frankie, recently released from juvenile detention. After an initial unprovoked assault on Andrew, Frankie and his gang continue to harass him and things escalate quickly. We empathise with Andrew’s fear for his family, and his desperation to be free of his persecutor. The harassment moves from theft and vandalism to far worse crimes against him. Frankie is a very nasty piece of work, completely without compassion or remorse with his teenage gang following him like a cult leader out of fear. You feel such great sympathy for Andrew and his family as Frankie’s attacks on them grow worse and the sanctuary of their home if defiled. The character of Frankie is contrasted with his younger brother Davie, who is almost the opposite, who has family loyalty to Frankie, but takes no pleasure from Frankie’s sadistic ways. Sadistic is the right word for Frankie, highlighted by the terrible violence he inflicts on those who he perceives have crossed him. The factors that have shaped Frankie’s personality are brought to life as the book progresses. The reveals about Frankie’s past add more depth to his character. Also as the book progresses, Frankie’s instability escalates, and then the torture starts… 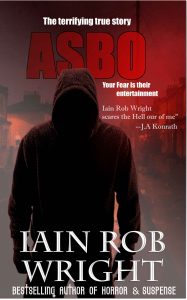 The book builds to a brutal climax as violence begets violence and casualties mount. I found the story gripping and you feel so much for the situation the protagonist finds himself in, it is gut wrenching. The small cast of characters that you get to know well and the claustrophobic nature of the plot, makes this a real page turner. You just hope and hope for justice or an end to the suffering. I don’t want to give the impression that this is torture porn on the written page, because it’s not. It is violent, but it’s far from glorified. I would definitely recommend this, it’s not a long read and it will have you hooked almost immediately.