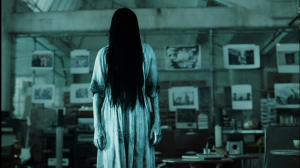 Rings was previously the title of a short film released as an extra on The Ring’s (2002) DVD and worked as a tie-in story between that film and its 2005 sequel. However, according to director F. Javier Gutierrez this Rings, was originally planned to be a prequel to the 2002 remake starring Naomi Watts. However, things changed when the actress did not plan to return to the franchise. Thus, now we have a sequel. It’s all just so confusing. Whatever ends up happening, we can be sure that the film will expand on the Ring universe and follow another story where the infamous videotape wreaks supernatural havoc.

Rings now has an official release date set for 1st April 2016 and this is not an April Fool’s joke – not as far as we know, anyway. The film has a script written by Jacob Aaron Estes, Akiva Goldsman and David Loucka, all who have been involved with previous horror films including, Summoning, I Am Legend, Dream House and House at the End of the Street. Rings will star John Galecki from The Big Bang Theory, so it will be interesting to see him in a genre that must be out of his comfort zone; although, he did have a part in 1997’s I Know What You Did Last Summer.