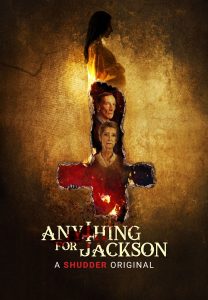 Synopsis:
A bereaved couple attempts to perform a “reverse exorcism” to bring their dead grandson back. In the process, they end up summoning much more than they bargained for…

One demographic that often gets the short end of the stick in horror is the elderly. If they’re not passing along quick, foreboding messages to campers, they’re probably delivering gross-out scares that prey on our innate fear of our bodies degrading. So it’s refreshing to see a film that not only features older characters in leading roles, but imbues them with a level of depth and dignity rarely seen in the genre.

That film is Anything for Jackson, the first horror feature from director Justin G. Dyck and writer Keith Cooper, a duo that has previously worked primarily on kid-friendly movies and cosy Christmas flicks. You wouldn’t know that from looking at Anything for Jackson, which isn’t afraid to paint the snow red (literally).

The film revolves around Audrey (Sheila McCarthy) and Henry Walsh (Julian Richings), a couple mourning the loss of their grandson Jackson in a tragic car accident. After abducting the pregnant Shannon Becker (Konstantina Mantelos), the Walshes chain her up in a soundproofed room of their house and use an ancient spellbook to invoke the spirit of Jackson. See, it turns out the Walshes are amateur Satanists, and they believe they can put Jackson into the unborn child. As for Shannon… Well, they’ll deal with that little wrinkle later.

Of course, things don’t exactly go to plan, and soon the Walshes’ home is crawling with spirits, each more unsettling than the last. This includes a particularly shriek-inducing apparition played by the always-excellent Troy James, and an interesting play on a time loop that delivers repeat chills. Dyck leans on practical effects as much as possible, resulting in a house of horrors that feels disturbingly real. Helped by a cold grey-blue colour scheme and a permeating atmosphere of grief, the film manages to feel haunted even when no spirits are on screen.

In the midst of all this horror, a fascinating character drama is playing out between the Walshes and their unwilling surrogate. Shannon has seen the writing on the wall and is doing her best to survive at any cost. The carefully laid plan is falling apart, taking Henry and Audrey right along with it. Cooper’s script takes the time to let us get to know the Walshes, with McCarthy and Richings effortlessly establishing a relationship that is more sweet than sinister. Less time is spent developing Becker, but this feels somewhat intentional. This wealthy older couple is treating a young woman’s body like a commodity—and by sympathising with her kidnappers, aren’t we doing the same?

With these three central characters carrying the weight of the narrative their shoulders, the film stumbles in the final act when it tries to bring a new antagonist into the fray. While the character is introduced earlier in the film and acts suitably creepy, his presence shifts the focus away from the most interesting element of Anything for Jackson: the Walshes themselves.

It’s a misstep, but not one that’s big enough to bring down an otherwise exceptionally successful film. Grounded in fantastic performances and enjoyable practical effects, the movie breathes fresh life into the many sub-genres it cribs from without ever feeling derivative. It’s an excellent day for a (reverse) exorcism, and Anything for Jackson delivers the goods.