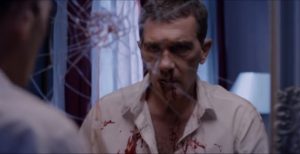 Revenge is sweet and, by the sounds of things, pretty generic in Acts of Vengeance, which sees Antonio Banderas as a lawyer who prepares himself for revenge following the murder of his wife and daughter.

The plot may be pretty by the numbers for this type of film, but a cast that also includes Dredd’s Karl Urban, Paz Vega (Talk to Her, Kill the Messenger) and cult character actor Robert Forster (Jackie Brown, Mulholland Dr.) could be enough to elevate this one from the pack.

Synopsis:
“A fast-talking lawyer (Banderas) transforms his body and takes a vow of silence, not to be broken until he finds out who killed his wife and daughter, and he has his revenge.”

Acts of Vengeance hits Blu-ray, DVD and Digital HD on November 28th. Check out this hard-hitting trailer in the meantime.