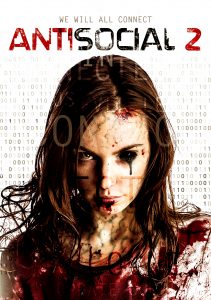 Given the cliff-hanger ending audiences were treated to in Black Fawn Films’ Antisocial, it was only a question of time before Sam (Michelle Mylett) would return brandishing her axe to dispatch as many Redroom users as humanly possible.

Whilst Antisocial 2 (our review here), the direct sequel to the 2013 original is currently available on iTunes, United Front Entertainment and Black Fawn Distribution have just announced its acquisition from Canadian studio Breakthrough Entertainment, marking the second film to be released through the new Canadian distribution partnership between the three companies.

Commenting on the news, the franchise’s director Cody Calahan (who also helmed recent festival fave Let Her Out) stated, “It’s been a long time since we started writing the first Antisocial film back in 2012. Now, to finally see both films on DVD is something really special. Personally, I always prefer to buy a film and hold it in my hands rather than download it so it’s great to see the physical release of these films being handled by both United Front and Black Fawn Distribution. Finally, fans can experience Sam’s complete journey.”

With the film now slated for a May 16, 2017 DVD release date some brand new artwork has just been revealed so we’ll leave you with that, along with the trailer and an exclusive interview we conducted with the film’s star, Mylett, just prior to the Fantasia debut.

Synopsis:
Years after having her newborn child stolen from her, Sam (Michelle Mylett) searches the world infested with infected users from the Social Redroom website. After befriending a young girl named Bean, Sam is captured and locked in a facility dedicated to finding a cure for the Redroom Virus. Trapped and tortured, Sam tries to escape the facility before an impending update on the Redroom site hits 100% and unleashes its final phase of attack.