Anti Matter Takes Us Through The Wormhole

Coming to selected US cinemas and VOD in September is writer-director Keir Burrow’s critically acclaimed sci-fi horror Anti Matter, which is said to be a twisted, noirish take on Alice in Wonderland. Check out the trailer below, together with a few stills.

Described as “art-house psychological horror at its finest” by Movie Crypt, the film played last year’s Raindance film festival in London, and landed on UK DVD last month. It stars Yaiza Figueroa as Ana, who sets out to uncover what happened to her during a brain-altering experiment. Philippa Carson, Tom Barber-Duffy and Noah Maxwell Clarke round out the main cast. 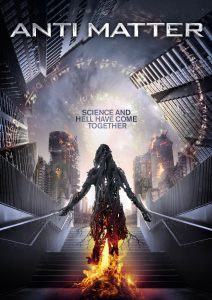 Synopsis:
Ana, an Oxford PhD student finds herself unable to build new memories following an experiment to generate and travel through a wormhole. The story follows her increasingly desperate efforts to understand what happened, and to find out who – or what – is behind the rising horror in her life.