Another The Fly Remake Taking Flight at Fox

Despite it having already been reimagined in one of the finest horror remakes ever, Fox is moving forward with another remake of 1958 sci-fi horror The Fly.

Kurt Neumann’s drive-in classic was given an FX-heavy, body horror makeover in 1986 by David Cronenberg, who cast Jeff Goldblum as Seth Brundle, a scientist who accidentally mixes his DNA with that of a fly during an experiment in matter transportation. It says a lot about Cronenberg’s earlier work that the film was considered his first ‘mainstream’ effort.

Presumably seeing franchise potential (1989’s The Fly II put a swift end to any such hopes following Cronenberg’s hit), Fox reportedly has Sleight director J.D. Dillard currently in negotiations to direct the remake. If signed, he would co-write the script with his regular writing partner Alex Theurer. 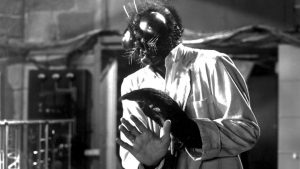 Fox has had the idea to re-remake The Fly for a while now, and even heard a pitch from Cronenberg himself back in 2012.

Keep your eyes peeled for more buzz on this in the coming months.