Welcome to an alternative history where Dracula became the ruler of the British Empire. In this world, vampires are openly present throughout human society. Some are loyal to Dracula, but others are seeking to depose him. We join this graphic novel in the midst of political intrigue in what would have been called Victorian London. It is the eve of Dracula’s Jubilee.

Two groups have set their sights on sparking a revolution against the Dracula regime. First, we have the anarchist Council of the Seven Days, to which our main protagonist, Kate, belongs. Second, the sinister Limehouse Ring represents London’s criminal underworld. Both groups offer unique and colourful characters. My favourite was criminal mastermind The Lord of Strange Deaths, who conjured images of the classic Fu Manchu movies from the sixties. The reign of Dracula has made unexpected allies out of all kinds of people. To keep these revolutionaries in check, Dracula has his shadowy secret police, Special Branch, and an adept torturer in the Tower of London. 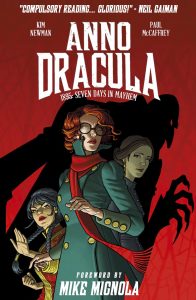 One of the interesting hooks of the series is the presence of historical figures. Almost immediately we see Thomas Edison mastering electricity. The book has a number of geeky Easter eggs and references which are fun to look for. There are always things to appreciate in the background of street panels. The period setting and the mixed society of vampires, humans, and other fantastic beings set a rich backdrop, and the art compliments the storytelling perfectly. These aspects ooze gothic, steampunk atmosphere. It looks and feels like you’re reading a Hammer film. The story is action packed, full of conspiracy and betrayals. It’s a game of cat and mouse as Special Branch stays on the trail of the anarchists.

Author Kim Newman is a journalist and film critic who is deeply involved in the horror world, writing both non-fiction and horror fiction. Newman’s Anno Dracula series and the world of vampires he has created offers novels set in time periods from Victorian times through the 20th century. This graphic novel collects the first five issues of a comic which expanded on the original Anno Dracula novel. The end of the book includes variant covers and Paul McCaffrey sketches of the characters. This graphic novel is a blast – very enjoyable.