Anne Rice’s THE VAMPIRE CHRONICLES Will Unfold on HULU 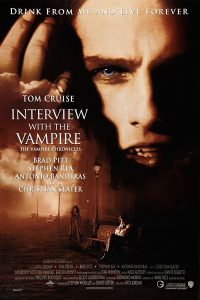 Fans of the vampire Lestat de Lioncourt and his minions will be pleased with this news. We’ve been hearing murmurs of a TV series based on Anne Rice’s 11-novel horror franchise, The Vampire Chronicles, since Paramount optioned the property a year ago. Though it has struggled to find its footing, today brings word that the series is going forward, having found a home at HULU.

Though Bryan Fuller was initially announced as showrunner, he has since exited the production leaving the position vacant at the time of posting (though THR reports the search for a replacement is active). Rice will produce the series along with her son Christopher Rice and Anonymous Content’s David Kanter.

Rice launched The Vampire Chronicles with Interview with the Vampire in 1976. That bestselling novel became a minor cultural phenomenon when a film adaptation starring Tom Cruise and Brad Pitt was released in 1994. Though the film still resonates with many modern Goths and morbid romantics, another adaptation, Queen of the Damned, failed to find the same resonance.

No word yet on who’s being eyed for major roles, nor a preliminary timetable for production, but we’ll keep you posted as details emerge. In the meantime, you can revisit the trailer and synopsis for 1994’s Interview with the Vampire, directed by Neil Jordan, below.

Synopsis:
Born as an 18th-century lord, Louis (Brad Pitt) is now a bicentennial vampire, telling his story to an eager biographer (Christian Slater). Suicidal after the death of his family, he meets Lestat (Tom Cruise), a vampire who persuades him to choose immortality over death and become his companion. Eventually, gentle Louis resolves to leave his violent maker, but Lestat guilts him into staying by turning a young girl (Kirsten Dunst) — whose addition to the “family” breeds even more conflict.