Anne Rice and her son Christopher Rice recently confirmed that Lestat and the rest of her vampires from The Vampire Chronicles will be heading to TV after the pair regained the rights. This means that the planned film at Universal was no longer happening and, unsurprisingly, she was pretty ecstatic.

This is just the first of a series of pieces of good news, because after a bout of health issues, it has also been confirmed that Anne Rice’s sequel to Prince Lestat, Blood Paradise, will also be with us soon. Additionally, Christopher and Anne are also working on a “#topsecretproject” that they can’t talk about yet, so what do you think that could be? 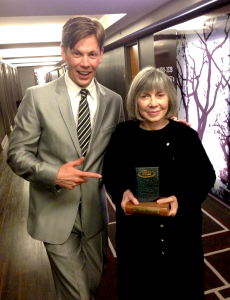 The pair recently finished their Prince Lestat and the Realms of Atlantis tour, so we’re expecting them to have a well-earned rest before jumping into anything just yet. However, we will leave you with a statement from Christopher, who has said about the secret project, “We’re not at liberty to discuss it yet.  We will get back to you when it’s time to give you the scoop, I promise.”

So, hopefully, it won’t be too long before we get the scoop on their new project, which surely must be horror.