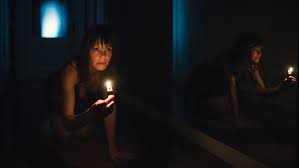 Plan to leave all logic at the door when you see director Greg Zglinski’s Swiss/Austrian/Polish psychological horror chiller Animals (Tiere), and I mean that in the best possible way. Time loops, alternate paths of possible realities, and unreliable points of view are just a few of the potential explanations to the deadly proceedings in this thought-provoking offering. Aficionados of The Twilight Zone, Roman Polanski’s apartment house trilogy, David Lynch, and Lars von Trier will find much to like here.

Celebrity chef Nick (Philipp Hochmair) and children’s author Anna (Birgit Minichmayr) are a married couple who are having major problems, not the least of which is intimacy issues. They embark on a months-long stay at a secluded chalet in the Swiss Alps to try to repair their damaged relationship. The couple hires Mischa (Mona Petri), an acquaintance of Nick’s, to care for their Vienna apartment in their absence. Meanwhile, a young woman who lives in the same building jumps to her death from her apartment window.

On the way to the chalet, the couple’s car hits a sheep in the road. Some injuries occur, and Anna is shocked to find the skinned animal in the chalet, with Nick having plans to prepare it for their dinner. With each business trip into town that he takes, Anna becomes more suspicious that he is philandering. Occurrences become stranger, more ominous, and more lethal as Zglinski takes viewers deeper into this twisted world. Both of the dwellings have locked doors that promise a great deal of mystery, for instance, and Anna is visited by a talking cat — and those examples are just for starters.

Zglinski updated the screenplay from one originally written a decade ago by Austrian film director Joerg Kalt, who committed suicide before starting on the film. Zglinski helms Animals splendidly, carefully balancing an intellectual approach and suspenseful emotional jolts so that things never fall into the trap of becoming cold and overly calculated. Piotr Jaxa’s cinematography is gorgeous, and the sound design helps add to the sinister, unsettling atmosphere. 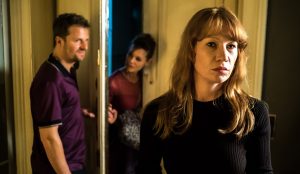 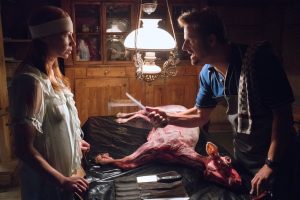 Hochmair and Minichmayr give crackerjack performances, pulling off the impressive feat of engaging viewers into emotionally investing in two characters who give us little reason to like them. Petri is also solid in her supporting role.

Animals is the sort of film that lingers with you long after seeing it, and those thoughts nag you to watch it again. Its refusal to tie up loose ends may enrage some viewers while winning over others. I look forward to my next viewing to see if any of the theories I have hold up; if not, I’ll quite enjoy coming up with new ones.