Synopsis:
In a small Danish town, a teenage girl begins experiencing unsettling changes to her body and mood, and learns a secret about the women in her family which everybody but her already knows… 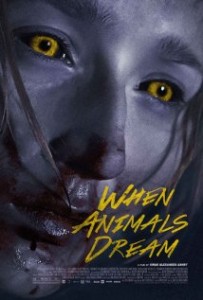 After catching the disturbingly brilliant Men and Chicken at a film festival recently, I have been on something of a Danish film kick of late, which led me to discover an odd little werewolf movie called When Animals Dream. The feature film directorial debut of Jonas Alexander Arnby, the film came out on DVD in the UK in May, and stars Sherlock’s Lars Mikkelsen alongside newcomer Sonia Suhl.

Suhl plays Marie, a sixteen year old girl who lives a bleak existence in a tiny Danish fishing community. Her sick mother Mor (Sonja Richter, Open Hearts) is mute and practically catatonic, her father Thor (Mikkelsen) is obviously depressed, and she is stuck working in a fish processing plant where her aggressive male colleagues abuse her under the guise of hazing, their pranks becoming increasingly sexual in nature. When she starts noticing her body undergoing some unusual physical changes, Marie finds herself in a tenuous position in her suspicious and prying community.

Using lycanthropy as a metaphor for female sexual awakening is nothing new, and When Animals Dream is often reminiscent of John Fawcett’s fantastic 2000 coming-of-age werewolf movie Ginger Snaps. The creature design in particular bears great similarities to Ginger’s makeup mid-transformation, when she is still somewhere between wolf and woman, though Marie’s condition never progresses any further than that. Where When Animals Dream differs is in its focus on lycanthropy as a hereditary condition as opposed to a commentary on ‘the monthly curse’. There are shades of Brian De Palma’s Carrie to be found here as well, something Arnby has admitted had a strong influence on his film.

Marie’s mother is always heavily sedated and confined to a wheelchair, completely dependent on her husband and daughter to feed and bathe her. The mystery of her condition becomes apparent fairly quickly when Marie’s own symptoms start showing and her father and doctor advocate she begin taking the same medication as her mother, which will supress her monstrous transformation but leave her in a similar helpless state. Of course, being of the new generation, Marie will not accept this fate, the film’s subtext becoming very clear when she tells her attractive co-worker Daniel (Jakob Oftebro) that ‘I’m transforming into a monster, but I need to have a lot of sex first’. She is (gasp!) the rebellious and empowered sexual woman who must be tamed at all costs. But forget a bucket of blood – Marie’s peers are looking to put her down if she releases the beast in their community. 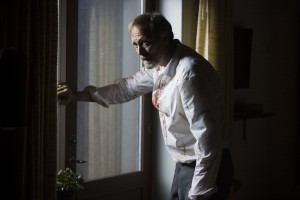 Like a lot of Scandinavian horror, When Animals Dream is a very quiet and understated film, conveying a lot through an affecting and melancholy score and minimal dialogue. Anyone expecting a gory, sex-fuelled thrill ride will no doubt be disappointed; the same can probably be said for any classic werewolf fans, because elaborate creature designs and howling at the moon are things this film isn’t interested in. That being said, if you leave your expectations at the door, this is a fairly solid little flick which can at 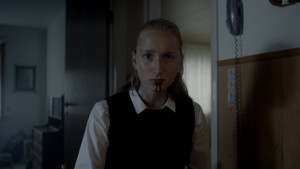 times be genuinely haunting. This is largely due to some fantastic performances, particularly from Lars Mikkelsen who does a lot with a fairly small role, struggling to come to terms with what he has done to his wife, fearing for his daughter’s safety, and finally accepting that Marie ought to live her life as she chooses. Suhl pulls off a difficult performance as the often expressionless Marie, the innocence in her wide eyes gradually blossoming into a dark knowledge as the film progresses.

Arnby seems to expect his audience to already know the usual beats of a werewolf movie and plays the whole thing very low-key, and this is both the film’s strength and its weakness. A few great scenes – like Marie defiantly parading the symptoms of her transformation in front of the townspeople, and crunching broken glass at dinner with her father – convey a lot while very little is said, but some vague explanation about what happened to her mother with some Russians on a ship may leave you scratching your head. At just over eighty minutes in length, it doesn’t outstay its welcome, and while it might be nothing ground-breaking, When Animals Dream is a melancholy little film with some great performances and an evocative score. There are already rumours of a Hollywood remake, and while this can be done effectively (as was the case with similar Scandinavian horror flick Let the Right One In), When Animals Dream feels very much like a product of its setting and should probably be enjoyed as such. There’s not much bite to it, and the slow pace will frustrate some people, but if you give it a chance it’s worth the watch.