Synopsis:
A teenage girl who has suffered for years from a variety of mental illnesses moves to a new town with her mother, hoping for a fresh start. But when she suffers another breakdown, she may in fact be possessed by the spirit of a girl who recently died in the town. 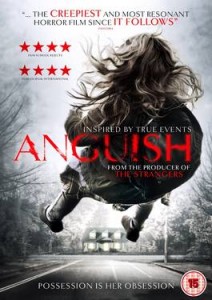 While sifting through the latest horror DVD releases, it’s always pleasant to find something which strays from the well-trodden paths of the genre. I was not expecting Anguish, a film which for all intents and purposes looked like yet another in a long line of uninspired possession flicks, to be anything other than paint-by-numbers generic, but it surprised me. It would have surprised me more if it had been fantastic, which it wasn’t, but we can’t have everything, can we?

Anguish is the directorial debut of Sonny Mallhi, who is no stranger to horror, having previously worked as executive producer on The Strangers and House at the End of the Street, amongst other films. I was not a fan of either, but Mallhi shows plenty of promise as a director, wisely choosing to focus on the emotional turmoil of the characters rather than relying on an overabundance of jump-scares. That’s not to say that there aren’t any, but the film at least tries to earn them by establishing an eerie atmosphere and sense of tragedy before it rummages in the box of old horror tricks.

Ryan Simpkins stars as Tess, who has just moved to a new town with her mother while her father serves abroad with the military. This move is intended as a fresh start, and this is a horror film, so it isn’t long before things inevitably start going wrong. After encountering a roadside memorial for a local teen who died in a horrible accident, Tess begins acting strangely and experiencing frightening hallucinations. But Tess was diagnosed with mental illness at a very young age and has been taking medication ever since, so it isn’t immediately obvious that this is symptomatic of a possession as opposed to a psychological breakdown. Or at least it wouldn’t be, if the film’s advertising didn’t make it abundantly clear that some paranormal happenings are afoot. A little more suspense as to whether Tess’s suffering was all in her head would have gone a long way, but one cannot complain too much, as it is in the characterisation of the spirit that the film really shines.

What sets Anguish apart from the onslaught of possession movies is that it spends as much time exploring the character of the dead girl as it does the living one being possessed. Our invading spirit is Lucy (Amberly Gridley), whose death was a sudden and tragic accident when she stepped out in front of a car while fighting with her mother Sarah (Karina Logue) about going on a trip with her friends. Unlike a lot of teenagers in horror films, Lucy is not an unlikable brat – the fight about wanting to be treated like an adult is one which we all had with our parents at some point or other, and Lucy’s attempts to possess Tess’s body are primarily motivated by a desire to reconcile with her mother. Similarly, Tess feels like a very real unhappy teenage girl, her loneliness and isolation told through little touches like video calls with a father she clearly connects with more than she does her mother, Jessica (Annika Marks). Simpkins gives a strong performance, effectively portraying both the tormented Tess and, in the second half, the dead Lucy who just wants to be with her mother again.

Insights are also provided into the lives of both girls’ mothers, Jessica struggles emotionally and financially with her daughter’s illnesses, and Sarah is unable to move on after Lucy’s death, even calling her phone just

to hear her speak on the voicemail message. Anguish stands out thanks to its predominantly female cast, focusing heavily on the relationships between the mothers and daughters. Sure, a male priest first suggests that Tess’s ailment may not be psychological in nature, but it is a refreshing change not to see him rush in to save the day in a hammy exorcism scene, instead taking the time to flesh out the female leads and explore their emotional responses to the issue.

Where the film falls short is in its balancing of emotional and horror elements. Anguish almost feels like two similar but still separate scripts whose pages got jumbled together, and the end result is somewhat schizophrenic. It is established in the opening scene that Lucy’s death was a tragedy with no one at fault, but the spirit assailing Tess in the film’s first half seems malicious in its intent, leaving me scratching my head as to why Lucy had suddenly become evil. But when she succeeds in possessing Tess, we discover she’s not really evil after all, and the film’s two halves feel jarringly disconnected as a result. This also prevents the director from harvesting any real scares after we learn the spirit’s motivation, which is a shame because the film has some genuinely creepy visuals in its early scenes, like multiple sets of dark handprints appearing against a lit window as Tess stands outside her home – one of a few unnerving hints that multiple spirits might be trying to get inside of Tess, in a scenario reminiscent of Insidious.

The film is never fully able to reconcile its scares with its emotional heart and ends up limping towards a lacklustre climax as a result, but it still manages to be an affecting little flick with believable and heartfelt performances from its leads. It’s a rare case of a film which might have worked better if the director had abandoned the horror elements altogether – but then, I probably wouldn’t have watched it, and as it stands, I’m mostly glad that I did.