Anger of The Dead Unleashed This Week 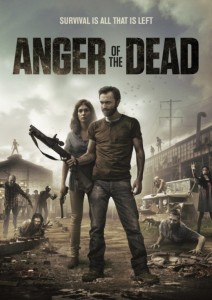 Based on his short film of the same name, Francesco Picone’s Anger of The Dead will see a limited US theatrical run from January 8th, alongside a release on digital platforms. Perhaps able to suppress that Walking Dead addiction until the show comes back on, Uncork’d Entertainment’s zombie flick is written and directed by Picone and produced by one Uwe Boll. Never failing to illicit strong opinions among horror fans with his unique brand of compellingly amateurish genre cinema, it’s fair to say the German auteur-gone-wrong isn’t stepping too far from his comfort zone.

The unquestioningly Walking Deadesque poster tells us what to expect and while the trailer certainly conveys a vibe not unlike that of AMC’s zombie success story, it kinda looks like it does it pretty well, and contains some unsettling moments.

Anger of The Dead’s curiously worded official synopsis goes like this:
“In a world ravaged by a virus that turns people into cannibals, a pregnant woman (Alice) manages to survive. Alice, in the company of two other men, strives to reach an island untouched by the plague. Meanwhile, a dangerous individual is on the trail of a mysterious girl, which causes Alice to realise that the zombies are not her biggest and only threat.”