AND THEN THERE WERE NONE: Film Review 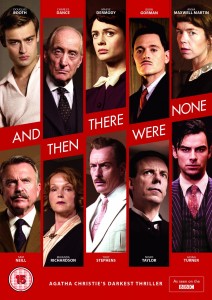 Synopsis:
Ten people – all apparently unknown to each other – are invited to spend the weekend at a mansion situated on an island off the Devon coast.  Upon arrival they are told that their mysterious hosts – Mr and Mrs Owen – are yet to arrive, but that in the meantime they should make themselves at home and enjoy the hospitality that has been laid on for them.  It’s only as time progresses that they begin to realise that the Owens are not coming, and worse still that each of those present has a guilty secret they’d rather not divulge.  And then the murders start …

You could be forgiven for shuddering at the thought of yet another adaptation of a novel by Agatha Christie, even if the fact that we have just celebrated the 125th anniversary of her birth seems as legitimate a reason as any to do more: could there possibly be any remaining ways to bring a new angle to the Queen of Crime’s work, particularly when the chosen story is one of her most popular and frequently adapted novels.  Surprisingly however, the new version of And Then There Were None – helmed by award winning director Craig Viveiros and written for the screen by Sarah Phelps – shown on the BBC over Christmas and now released on DVD, manages to appear remarkably fresh, despite it bringing the count of screen adaptations to well over ten.

Much of Agatha Christie’s work – though mainly involving death, in a multitude of inventive forms – also encompassed various other fears and emotions. Her stories included everything from the occult and witchcraft, found in such novels as The Pale Horse and By the Pricking of my Thumbs, to romantic interest, with several of her books featuring married amateur sleuths Tommy and Tuppence Beresford. One thing most had in common however was their homeliness, despite an array of gruesome deaths meted out to the unfortunate victims who peopled the proceedings, whilst obsessive love was frequently at the root of much of the disturbing occurrences, with even such taboo subjects as homosexuality and unnatural family relations frequently peppering the storylines. However, no matter how close to the edge the situations came, Christie generally left it to her readers to fill in the more graphic details.  And, considering that everything – save the odd train journey east or boat trip past the pyramids – took place within the bucolic surroundings of the south of England, there was always a feeling safety in the familiar homeliness no matter how nasty things got for her characters. Even most of the previous takes on And Then There Were None – save for Stanislav Govorukhin’s 1987 Russian adaptation Desyat’ negrityat, that kept both Christie’s grim storyline and the novel’s original controversial title – which is widely considered to be one the author’s darkest tales, kept things just the right side of disturbing.

Which is where things differ for this new – and very grown up – interpretation of the novel, which was recently voted by her fans as Christie’s best book. Being produced for television there were of course going to be limitations in what could be shown on screen.  However, even taking this into consideration, it seems those behind the production have pushed the limits of acceptability as far as possible.  This time round there are some amazingly graphic murders, including that of the first victim which is both shockingly unexpected and vicious, whilst another protracted strangulation is toe curling in the extreme.  Add to this some full on love scenes which would likely have made Christie herself blush, and this interpretation is as far from the expected as you could hope to find in mainstream viewing.

Clearly aiming to play heavily on the chill factor – possibly in an attempt to widen the appeal for a story by an author now seen by many modern audiences as somewhat twee – the whole production is positively saturated by a sense of gloom, doom and gothic menace, which simply adds to its theme of distrust and suspicion.  Both the decadent, yet strangely faded mansion where the murderous proceedings play out and the remote island where it is situated, have a wonderfully forlorn air, awash in a sea of storm-swept greys, blues and mottled greens.  People this with a host of characters – marvellously brought to life by some of Britain’s best thespian talents including Charles Dance, Miranda Richardson and Toby Stephens, as well as new heartthrob of the moment, Aidan Turner – none of whom the audience will have much sympathy for, and this is a film that sits heavily at the back of the mind, clawing at the subconscious long after it has finished.

Watched in one sitting – instead of the three, one hour snatches it was shown in on TV –  the 180 minute running time does feel as if it could have been trimmed without loosing the story’s overall impact.  However, even taking this into account, it is unlikely this latest interpretation of the classic chiller will be bettered anytime soon.