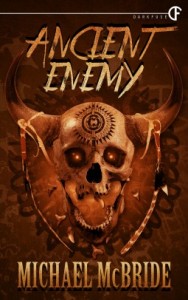 Set in Southern Colorado in a land once ruled by the Anasazi Indians, it was the Navajo that called them Anaasází or Ancient Enemy and this story is born in a land rich with history, and the mysteries surrounding a population that simply disappeared.

The story centres on Sani Natonaba, a young man of Ute and Navajo blood, his name has significant meaning, given by his Father, a traditional Navajo name “Leader of the war against the old ones” and for a young man Sani feels great responsibility on his shoulders. His grandfather is paralysed from a stroke, his Mother is an alcoholic and they live on a reservation, very much alone.

When some creature starts to butcher their livestock, Sani finds himself in a battle against something inconceivable, his grandfather knows something, he can help but frustratingly can’t communicate in any way except with the windows of his soul, his eyes.

Told in first person we travel a dangerous path with Sani, one of terrifying discovery and an evil that has plagued his people for centuries. He must look to the past, uncover the gravest secrets and continue the fight of his ancestors.

I won’t give any more away, except to say that this is a fantastic read, the pace and tension are spot on. The attention to detail is impressive and the research, second to none. Whatever Michael McBride turns his hand to, be it horror, mystery or thriller, he continually produces gripping stories with stunning characters and long may it continue.