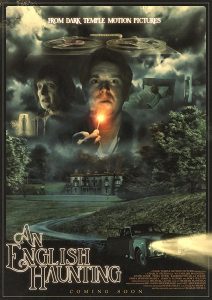 Courtesy of Dark Temple Motion Pictures, British indie horror An English Haunting releases on DVD in the U.S. on April 10th, before coming home to the UK on April 27th.

Set in 1960s England, the film sees a young man moving into an isolated manor house with his alcoholic mother to care for his dying grandfather. But after a series of ghostly events fills the house with dread, it becomes clear that the old man’s illness may have a supernatural cause—one that can only be cured by uncovering the house’s dark history.

An English Haunting was written and directed by Charlie Steeds. Take a peek at the chilling official trailer below.