It’s beginning to look like a curse surrounds Maniac director Franck Khalfoun’s upcoming Amityville: The Awakening, with Dimension Films having now delayed the film once again.

Originally slated for release more than two years ago, the film has undergone a title change and multiple delays to its release already. Initially handed an R rating by the MPAA, it was trimmed and recut for a PG-13. More recently, the film was looking all set for its release date of January 6th, 2017, and Dimension had even started running TV spots for it. 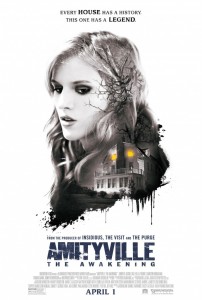 Well, that January release ain’t gonna happen, and Dimension have made no announcements regarding a new date for the film. It is being reported that we could be waiting up to three years before we finally see Khalfoun’s new Amityville tale, which will presumably still follow the official synopsis:

Belle, her little sister, and her comatose twin brother move into a new house with their single mother Joan in order to save money to help pay for her brother’s expensive healthcare. But when strange phenomena begin to occur in the house including the miraculous recovery of her brother, Belle begins to suspect her Mother isn’t telling her everything and soon realises they just moved into the infamous Amityville house.