Great news for all those UK fans of the Soska Sisters! You just read our exclusive interview with Jen and Sylv in this months issue of SCREAM and now you too can get to watch the horror theatrically from Jan 11th and via DVD and Blu-ray from the 21st.

One of the year’s most horrific highlights, American Mary tells the story of broke student Mary Mason (Katharine Isabelle) who grows disenchanted with medical school and the doctors she once idolised. The allure of easy money sends a desperate Mary through the gruesome world of underground surgeries but soon finds they leave more marks on her than the so-called freakish clientele… Smart, sexy, funny and utterly gorgeous to look at, American Mary features a standout lead performance from horror icon Katherine (Ginger Snaps) Isabelle, and puts the Soska Sisters, aka the Twisted Twins, squarely at the forefront of modern horror filmmaking. Unmissable.

American Mary will be released on DVD and Blu-ray from Universal Pictures (UK) on 21st January 2013 and will open at UK cinemas on 11th January 2013 (Frightfest). 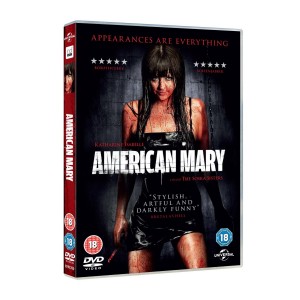