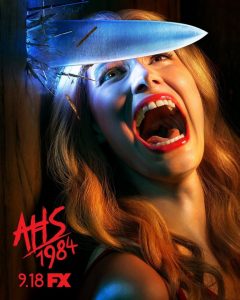 American Horror Story: 1984 will harken back to the golden era of slasher movies, so it’s fitting that the season’s official poster looks like it belongs on an old VHS tape.

Featuring a woman screaming in terror as a knife is plunged through the door of her hiding spot, the image could have been ripped right out of one of the Halloween sequels. This season of the horror anthology series takes place at Camp Redwood, a summer camp plagued by a masked killer, and the teaser trailers stir fond memories of films like Friday the 13th and The Burning.