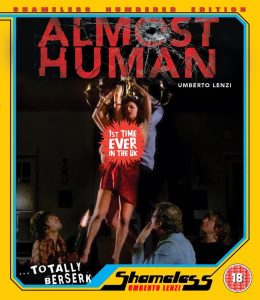 Umberto Lenzi, best known for Eaten Alive! and Cannibal Ferox, made a wide range of movies throughout his career, directing gialli, spaghetti westerns and European spy films. In the 1970s, Lenzi began to make Poliziotteschi movies, a particular brand of Italian crime films that became popular in the late 1960s. Almost Human (Milano Odia: La Polizia non può Sparare) was released in 1974, and was largely condemned by critics for its excessive violence, misogyny and nihilistic world view. But released on Blu-ray by Shameless Films this month, Almost Human has never looked better, allowing viewers to truly appreciate Lenzi’s directorial ability and Tomas Milian’s brilliant performance as the central antagonist.

After a botched bank robbery, Giulio Sacchi (Tomas Milian) decides he needs to rise above the ranks of petty criminal by becoming a notorious serial killer. He kidnaps the daughter of a wealthy business man, hoping to escape the country with the enormous ransom he plans to collect. Pursued by police inspector Walter Grandi (Henry Silva), Sacchi soon finds himself committing more and more serious atrocities, killing anyone who stands in his way. But as the police start to close in on him, the definitions of criminal become blurred, with Grandi realising that stopping Sacchi may mean taking the law into his own hands.

If there is a theme that runs through Almost Human, it’s not only that the authorities aren’t to be trusted, but that class and education are what separates criminals from civilians. In one scene, Sacchi explains that drugs are made to make life more bearable for people with no opportunities in life, and in the infamous villa scene, Sacchi’s hatred of the bourgeoisie is made all too apparent. Amazed that a group of rich socialites spend all their time drinking, Sacchi takes much delight in raping and killing them and their children. When he sexually abuses a man in this scene, Sacchi proudly declares that he believes in “equal opportunities for all.”

As such, Almost Human focuses largely on the psychological aspects of its characters, particularly when it comes to the film’s antihero Guilio Sacchi. Tomas Milian’s performance in the film is quite extraordinary, especially as he becomes more and more psychotic as the film progresses. But made in a time of socio-political turmoil in Italy, creators of Poliziotteschi films were careful not to glamorise crime, ensuring that criminals were never seen as likeable or sympathetic. This is really the biggest downfall of the film, as having some context into Sacchi’s lifestyle may have made his performance all the more powerful.

On a technical note, it’s also worth mentioning that the script is wildly different in the English and Italian versions. A lot of this will come down to personal taste, but the Italian dub is much more hateful and violent, with words like ‘hump’ replaced with ‘ass-fuck.’ As such, the English version seems to lose a bit of its power, especially as the film relies so much on the violent language that Sacchi uses. Aside from this, the Blu-ray release from Shameless looks and sounds fantastic, and contains some interesting extra features too – specifically an interview with Tomas Milian in which he talks about the film. The sound is clean and well-balanced, effectively showing off Morricone’s spikily incessant score.

Almost Human is probably one of the most brutal and nihilistic crime films ever made. Lenzi’s direction is competent throughout (if you can look past those ubiquitous zoom close-ups), and Tomas Milian’s performance as Guilio Sacchi is both nuanced and layered, successfully elevating the film into something more than the sum of its parts. With some interesting questions around morality, Almost Human has been unfairly remembered as nothing more than a trashy, excessively violent crime film, but hopefully, the recent re-release from Shameless will allow new audiences to see what else the film has to offer.