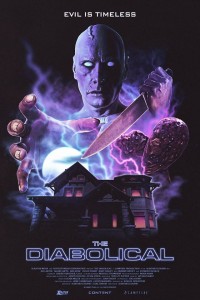 Writer/Director Alistair Legrand’s debut feature film The Diabolical, one of the most inspired and sui generis supernatural yarns of recent years, releases this 16th of October. Boasting a top-drawer cast, the film is headed up by Ali Larter who plays Madison, a protective widowed mother fighting to protect her two children when they find themselves awoken nightly by an increasingly strange and intense presence.

SCREAM: What was the main inspiration behind The Diabolical as it is such a unique take on the supernatural genre?

Alistair Legrand: Well I love haunted house movies and I never wanted to make something that was not respectful to the genre. At the same time I also wanted to provide a new take on it and to look into why rooms go cold or why objects suddenly move on their own. I wanted to explain all of that in a really unique way. I also love science fiction films so I wanted to meld the genres with a passion. I really love terrible shows on the television like these paranormal investigators who go inside and try and listen to audio tapes to somehow figure out there’s a voice to be heard in them. All of these were definitely the inspirations behind it.

So talking of paranormal investigators, did you actually contact any to help you during your research for the film?

I wanted to [laughs]. The problem is that I live in Los Angeles and our paranormal investigators there are completely crazy so it wouldn’t have been authentic. If I had been in pre-production in England I think I would have had better luck. I’ve always been a fan of ghosts and things that go bump in the night and we certainly knew enough going into this. We were our own little Ghostbusters, Ray and Winston.

Is it true that you wanted Ali Larter in the lead right from the word go?

Yes, because Ali is AMAZING and I’ve been a fan for ages. She has an amazing screen presence and she doesn’t even have to say anything and she just exudes this internal power and majesty. She’s really strong and we needed an actress that could fight back from the villain but at the same time has an emotional side to her as well. Even when Ali is in a scene covered in blood and running you can see the gears turning behind her eyes. She also came to the film from a very real place as she is a mother as well and she literally latched onto the material.

The film really focuses on a mother protecting her young ones. How did you bring out the inner maternal instinct in you when writing the script?

That’s basically just down to how I was raised. All that comes from a real place and we also grew up on a creepy old farm so things were always going bump in the night and our mother would always be taking care of us.

The other two leads are child actors Max Rose and Chloe Perrin. When I spoke to Ali she said you were phenomenal working with the children on set.

I love working with kids and I am a counsellor at a camp every year where we teach kids how to make movies. That really helped sell the film to Content. Jamie Carmichael, our Executive Producer really wanted to make sure I was okay working with kids and that I could actually do it so once I started talking about these camps they became much more comfortable going with a first-time director. It can be a big deal because it’s important that you can both talk to them on their level and make sure they are going to do their job. It was important to find kids who came across authentically and stutter and think about their dialogue and not actually say everything perfectly. Max did that beautifully and he felt like Ethan Hawke in Explorers.

Chloe was the most nerve-wracking time because I really wanted to find someone cute and like Drew Barrymore in ET and we got her audition tape at the very last minute and she just blew us away. She also looks like she could be Ali’s daughter. The kids weren’t divas and they were just so excited to be there every day.

I found the camerawork to be really authentic, particularly a lot of those swooping shots inside the house. Where did that idea come from and was it easy for the actors to work with cameras flying around the set?

That style just comes from me and my cinematographer John Frost, who I have worked with for a long time. I really love De Palma and Zemeckis, especially the film Contact which was the main influence for the visuals in this film. I really love involving audiences on a rollercoaster ride so that’s the technique I love using, providing it doesn’t become too distracting.

The style we used did worry me a little at first in terms of the actors being able to work like that but it really showed me what it’s like to work with professionals as they just have a different understanding of camera placing and Steadicam operators than anyone else. It’s like a dance to them so when you walk them through it they can do it really quickly and respond because it’s such a big part of their performance.

How involved were you when it came to Ian Hultquist’s amazing score that really bolstered the tense atmosphere?

That was by far one of my favourite parts of the process. When I was growing up it was actually composers more than directors that influenced me towards becoming a filmmaker. I used to listen to things like Danny Elfman and Hans Zimmer and play with my action figures to design scenes so when I got to work with a composer it was a dream.

We were looking for a really unique sound and I wanted something that was bizarre but at the same time sort of like something as big as you would expect to hear in a big studio film: driving and loud and compulsive. Ian was perfect for it because he is very independent-minded but he and I love big music scores so we both wanted to make the movie sound much larger than it was.

Is it true that you have an idea for a sequel to The Diabolical as well as a couple of other genre scripts in the works? I know Ali is certainly up for a sequel.

Yeah, I really want to work with Ali again but at the same time also want to keep working in that world. We have two treatments for two completely different The Diabolical 2s. If there’s ever a demand for that then we’d be ready to go with a more expensive version or a more grounded one.

We’re also working on another two scripts that are in their early stages of getting funding for which we hope to film next. One is kind of a Cronenbergian film about face transplants which has a little bit of science fiction but it’s mainly horror. The other one is more in the vein of The Hitcher and I’m dying to get started with that. I’d say that out of the gate The Diabolical is going to be our most complicated film for a little while and we’re going to go back to something a bit more focused on just telling a really scary story.

We’d like to thank Alistair for speaking to SCREAM about The Diabolical which we urge you to catch. The film will be released in select UK Cinemas and on VOD platforms on Friday October 16th and to DVD on Monday October 19th, 2015. The US Theatrical, VOD and iTunes release date is this Friday, October 16th.  The DVD and Blu-ray release in the US is November 3rd.