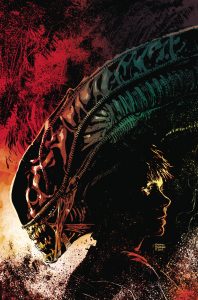 Aliens is one of those oddball cultural phenomenon’s that just keeps on giving. From its inception in 1979 to the most recent 2017 release Alien: Covenant, we just can’t seem to give up these cuddly little space dwellers. It is perhaps in part to Dark Horse Comics commitment to keep the franchise alive during film seasons that in between the six movies, we have entire volumes of Alien stories and mythos to sift through. Since 1988, Dark Horse has consistently been putting out Alien comics, each one more gruesome and further out in the emptiness of space than the last, with Aliens: Dust to Dust joining as the newest addition. While more action than story from the inaugural first issue, Dust to Dust promises a solid story arc for those who are patient and definitely delivers on the more gruesome aspects of the Alien procreation activities.

The comic focuses on a mother and son duo who live on a far off space colony. The son, Maxon, is woken up to a baby Alien humping his mother face and rips it off from his still living mother. Together, they escape their home and hit the streets, facing an abandoned town over-run with Aliens and their babies. Maxon’s mother quickly decides that they need to head to the escape ships that line the settlement but the way is heavily blocked by the space creatures. Can the two make it to the ship in time or will they die in the streets before they even get close?

As stated, the comic bursts into a survival-mode opening, pushing the main characters out into the street and into danger. The comic avoids telling us the details about the colony or even how the Aliens had arrived (perhaps saving it for a later issue) and thrusts the reader into the post-arrival havoc. An interesting point in the comic is the clear indication that no one seems to know what the Aliens are, so the story is either set before Aliens became a recognisable species or the information had yet to reach them. Being genuinely caught off guard, the reader immediately feels sympathetic for the characters, especially as the odds become instantly stacked against them. Also, the choice in having a mother-son team seems to strongly harken back to the 1986 Aliens where the lead is harnessed with a small child. Maxons mother even sports Sigourney Weaver’s short, curly haircut, giving it the extra oomph when shit ends up hitting the fence.

As far as first issues go, there’s just not much to say about it. The work is billed as a ‘terrifying coming-of-age’ story, but it’s currently only on the ‘terrifying’ part. It really is more action than anything else and honestly, would probably make a kick-ass first level for a video game. Character development is secondary to the plot and are made up of “scared kid” and “tough mom,” which at this early in the game, is probably all the writer could fit in. There is, of course, the standard twist at the end which makes for a good jumping off point for the second issue, so the comic does entice the reader to come back and pick up the next instalment. The art is scratchy and jumpy, great for the fast pace of the work, but doesn’t break the mold when it comes to originality. The real standout is the colouring and the Aliens themselves; both inspired by the movie-verse’s bizarre edge-of-the-universe appeal. It feels like a true space colony, granted one that’s long been terraformed and paved. It’s a good look. 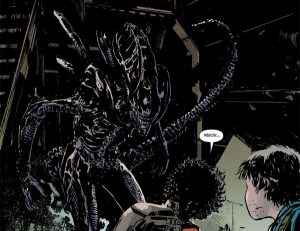 If you are one of the millions of fans that have insatiable sci-fi horror hole that can only be filled by more Aliens, definitely check out Aliens: Dust to Dust. Just be sure to have some change left over when the itch for the second issue comes knocking on your door.