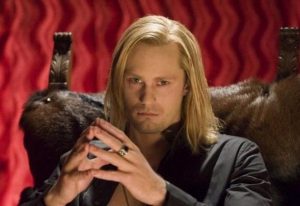 Billed as a ‘Gothic road trip thriller’ and due to start shooting next year, Fever Heart has started to add some names to its cast. As reported by THR, True Blood’s Alexander Skarsgård and Suicide Squad’s Cara Delevingne have signed up to head the film.

Fever Heart marks the feature debut of director Ben Briand, who has made a series of acclaimed (and brilliantly-titled) shorts including Some Static Started and Blood Pulls a Gun. Briand also co-wrote the film alongside Blood… writer Kevin Koehler. Picture Films’ Margot Hand and Matt Dooley will produce, with Michele Bennett and Nadine de Barros acting as executive producers.

Here’s the mysterious and intriguing synopsis:
The road movie follows an amnesiac (Skarsgard) who teams up with a quick-witted circus sharp shooter (Delevingne) to uncover his lost memories. With a charming and malevolent tracker named Blood Lieberman in violent pursuit, the pair needs to learn to trust each other if they are going to survive this strange land stained with mysticism.

Exec producer De Barros says, “I’m a huge fan of Ben’s work. I’m overjoyed at the opportunity to work with him. Ben and Kevin’s script had me on the edge of my seat, and Alexander and Cara are the perfect match for this material.”

Horror-tinged road movies are far too few in number, and I’m a big fan of the likes of Race With the Devil and the hugely underrated Drive Angry. Here’s hoping Fever Heart is a worthy addition to the diminutive sub-genre.