Test screenings for upcoming horror blockbusters has become a complicated practice. Though considered a necessary component in the filmmaking process, screeners recently leaked details and (predominantly negative) reactions for The Predator and Halloween (despite being throttled by nondisclosure agreements). Though no direct correlations were admitted, both films were cracked open for additional reshoots.

On the other hand, the buzz created from a test screening can become infectious, and the folks at Warner Bros are hoping extremely positive reactions from early showings of The Meg will increase the number of butts in seats. The film hits US theaters on August 10th and it’s already getting rave reviews. Twitter user Drew Dietsch gushed:
“The Meg is the most enjoyable movie of the summer. You’ll scream, you’ll laugh, and you’ll stay the hell out of the water. Seriously, I can’t sing this movie’s praises enough. It’s pure fun from start to finish. Everything you want out of a trip to the movies.”

The Meg is based on a series of novels penned by Steve Alten; the film is directed by Jon Turteltaub and stars Ruby Rose, Jason Statham, and Rainn Wilson. Check out the trailer and synopsis below. 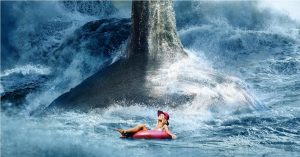 A massive creature attacks a deep-sea submersible, leaving it disabled and trapping the crew at the bottom of the Pacific Ocean. With time running out, rescue diver Jonas Taylor must save the crew and the ocean itself from an unimaginable threat — a 75-foot-long prehistoric shark known as the Megalodon.