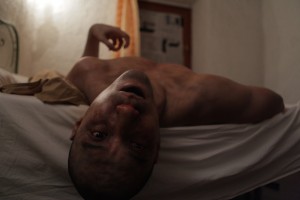 Synopsis:
Afflicted follows Cliff and Derek, two best friends as they set off on their once in a lifetime trip across the world. Their travels take the darkest of turns whilst in Paris as one of them is struck by a mysterious illness. In desperation to find the source, the duo must come to terms with what has happened before things spiral out of control and the chaos consumes them both.

Doing for creatures of the night what Chronicle did for superheroes, Afflicted is a first-class found footage movie that I’m confident everyone will enjoy. Superbly directed by Cliff Prowse and Derek Lee, the film utilises the found-footage tropes to put the audience slap bang in the middle of the story creating a captivating thriller where the events in the film feel genuinely real. The plot is relatively simple and there is very little space for character development but the execution of the idea is simply outstanding.

Weaving action and horror elements brilliantly, Cliff Prowse and Derek Lee offer an engrossing film which is dazzling to watch whilst sending chills down your spine. By serving up a healthy portion of jump scares combined with its superior make-up and special effect techniques, Afflicted remains, at its core, a veritable triumph as an engaging horror movie.