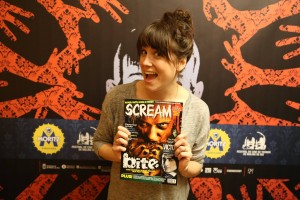 Further to its success on the festival circuit as far a field as Seattle and Toronto, video game-turned-movie director Nathan Hendrickson’s directorial debut, The Hollow One came to our particular attention when announced as part of the official selection at this year’s Molins de Rei Horror Film Festival.

Tackling the themes of grief and culpability, The Hollow One finds an emotionally damaged woman Rachel (Kate Alden) heading home with her sister Anna (Chelsea Farthing) in search of their missing father shortly after the loss of their mother in a tragic accident. When it comes to the crunch Rachel is forced to confront her tragic past and a shadowy figure with sinister intentions.

SCREAM: Before The Hollow One you starred in a film called The Device that also focused on two sisters and a mysterious artefact. Were the similarities absolutely coincidental?

Kate Alden: Well we actually filmed The Hollow One before I was offered The Device but the most hilarious part of it was that when I was given the synopsis of the film I was like, “Wait a minute! I just filmed this didn’t I?” But the two films turned out to be remarkably different in terms of style and pacing and script and visual elements.

SCREAM: This is Nathan Hendrickson’s directorial debut, having worked primarily in the video gaming industry before. Would you say he brought a lot from the gaming world to his directing methods?

KA: He was so calm as a director. As a first time director there can be a tendency to have an erratic nature and be concerned about different elements but whenever he was working with any of the actors he was just very calm and really able to evoke the different kind of emotions that he was hoping for in the film. I could tell that he had directed before, and he has, but just not in a feature format. He’s more used to directing people in blue suits with motion caption dots all over them. But it was really wonderful to be able to experience that with someone and we both essentially got to do our first feature together.

SCREAM: Having worked on video games I’m guessing he shot scenes with all the CGI clearly laid out in his mind. Was he particularly instrumental in helping you all visualise the scenes before shooting them?

KA: Absolutely, and with the CGI what we lucked out with is that the dark figure, The Hollow One, was played by someone who was physically there so we could see this presence but we just didn’t know what it was going to look like in the end. I’m really pleased with the graphics that they’ve implemented. You can tell that it’s definitely got some video game influence to it.

SCREAM: So what surprised you the most when you saw the final cut?

KA: The hands! The hands that come out of his face. That totally caught me by surprise. They had told me that they were going to be there but when I saw them creeping out of his face I went, “Okay, now that’s cool!” 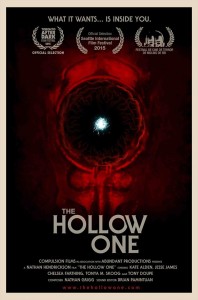 SCREAM: The film suggests that some of the plot could be based on some kind of mythology. Did Nathan go into much detail in terms of the mythology behind the story?

KA: A little bit. I related to Nathan’s take on what an ancient alien type race would possibly embody and how they would express themselves. He had this vision where he had been fleshing out the ideas of good and evil and his place in the cosmos. If you look at the film it really questions just what is the difference between paranormal and alien and a potential ancient being and I think he really wanted to explore those aspects. But I think maybe he is still actually figuring out himself what that figure really means in his psyche.

SCREAM: If he is still trying to fathom it out how were you able to go off and research to decide exactly what it was and how your character would respond to this entity?

KA: Well I related it to a lot of the archaeological dig plot lines that were in the script and so in my brain I was like, “Okay so this is something that has been around even longer than we can even fathom.” I also knew it had sinister intentions but not necessarily for the sake of being sinister as it wants to experience something different. It sort of follows the fallen angel thought, at least in my brain.

SCREAM: A lot of reviews are comparing your performance to the typical ‘80s horror movie final girl. Was that something you set out to portray specifically?

KA: I think that’s just something that ended up coming about because of the style choices of Nathan. But I love it. I think it’s wonderful.

SCREAM: The film has also been compared to Prince of Darkness. Did Nathan mention any films he had been inspired by or suggest films you could watch before shooting?

KA: Actually not at all. We took it from an original angle and really worked through everything together as a team. 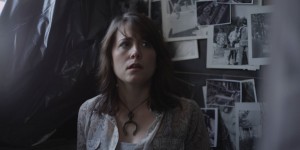 SCREAM: When you say working as a team does that mean you got to spend plenty of quality time to prepare with your co-stars?

KA: Actually no. Hardly any. We got brought into the film really close to when we started shooting and I think it’s one of all our biggest regrets that we didn’t get to spend much time during preproduction. But we all clicked very quickly. We all had a couple of long days before we started shooting where we just bonded like crazy and through the course of shooting it just grew more and more because we were spending 14 hours a day together.

SCREAM: What about the location where you shot? Was it as desolate as it appears in the film?

KA: Yes it was and there was actually no cell service out there so that’s real! It was beautiful though. The landscape was beautiful and we stayed in a town that was fairly close to where it was and we would come in every morning.

SCREAM: The end leaves things wide open to theories and a possible sequel. Have you heard any audience theories that you weren’t expecting?

KA: I haven’t yet gotten any particular theories in terms of what might be going on except for that I kill everybody. That’s the thing I hear the most. Everyone comes out of the cinema saying I killed everybody but we don’t know if that’s true or not because they’re still alive at the end “technically.”

SCREAM: And have you spoken to Nathan about a sequel?

KA: Yeah, I think he is definitely interested in fleshing out a sequel at some point. I know he wants to step back because this particular film has been living in him, and with him, for so many years that he wants to explore something different for a little bit. But he has every intention of fleshing out an earlier story as to what lead up to this and then a later story as to what’s going on with Rachel at this point going forward.

SCREAM: What did being an Associate Producer bring into the fold for you?

KA: I wasn’t originally a producer on the film and got brought into that position later on once the film had been edited down. That was because they needed help with festivals and distribution and just communicating with the film world. It’s been wonderful. It’s been a steep learning curve for me doing something that I have dabbled in a little bit but I’m no expert and I’ve had some great mentors which has been wonderful.

SCREAM: I think next up for you are a couple of short films, right?

KA: Yes. I did a lovely little horror short done by the same creative team behind another short that has nothing to do with horror called Big Boy that’s been getting a fair amount of festival recognition this year and they wanted to kind of piggyback off that which they premiered at Tribeca. And then just a fun little buddy comedy/rom-com type of film called Wait and then I’ve been doing a couple of television projects that I can’t talk about right now but you’ll know about it in 2017.

We’d like to thank Kate for speaking with us at Molins de Rei Horror Film Festival and we’ll leave you with the trailer for The Hollow One: