Accidental Exorcist gets Drunk and Purges Demons in New Trailer 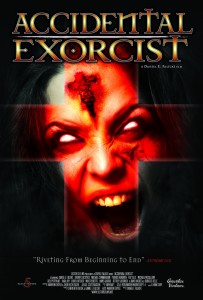 A new trailer for Accidental Exorcist has landed ahead of a limited US theatrical run which starts on June 24th, and while we’re told to expect a horror comedy, the clip eschews any laughs in favour of relentless demonic imagery. The film will be available on VOD at the same time, having been pushed back from its planned March release date.

“Richard Vanuck is a thirty-something, dirt poor alcoholic who can’t hold down a day job or maintain a normal life due to a very special “gift” he was born into. All Richard really wants is to finish his book but fate dealt him a very strange hand – he is a natural born Exorcist. In fact, he is the best there ever was and with possessions on the rise across the city, he’s booked solid. Reluctantly, he faces the fact that performing exorcisms is the only thing he’s truly good at even though it’s wearing him down and making his life utterly miserable. Case after case, he stares evil incarnate in the face, taking on satanic forces to help those in need. However he soon finds his power may also come with a cost to his own soul and must find a way to finally save himself before time runs out.”