Synopsis:
A journalist called Julia (Jessica Lowndes) becomes embroiled in a murder mystery that leads her to the infamous Jebediah Crone (Dayton Callie); a man who is collecting rooms from houses of the dead, but for what purpose? 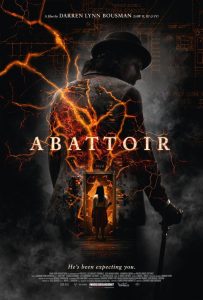 Abattoir is a far from brilliant, but a perfectly watchable journey into a nightmarish and noirish world filled with impressive visuals and a solid story to boot. What it doesn’t deliver in terms of scares it makes up for in spectacle, elegantly crafted mystery and am immersive story. It is undoubtedly a tad bit silly at times and the overall concept does demand a certain amount of belief suspension, but horror doesn’t have to be real and Abattoir is an excellent exploration of fantastical and deadly events that will leave you satisfied by the end.

Abattoir is more murder-mystery than horror, although it does have a supernatural thread running through it. Splashed with noir-esque elements that include an accidental femme fatale who dons red lipstick, a mysterious police officer and a jazz-laden soundtrack, the film works well as a love letter to 1920s noir and all its evocative mysteries. It is an aesthetically pleasing work of fiction overflowing with shadowy lighting and askew camera angles that enhance the intrigue and create a seductive, but creepy, atmosphere. The themes within Abattoir further its homage to noir as it centres on a singular person’s quest for the truth and the fight to expose wrongdoings. The twist comes in the characterisation of the woman who undertakes this role, but also fits the bill as a type of femme fatale. She accidentally charms Detective Grady in to dangerous situations, because his feelings for her restrict him from doing anything else. Her character arc is a predictable one; she starts the film as an eager journalist that is desperate for her big break in the crime division, and voila, she finds herself in the crime of the decade with a man who has manipulated and controlled those to do his dirty bidding. Abattoir is a mish-mash of genres, films and feelings, but it is still able to craft its own identity, even if it isn’t perfectly original. 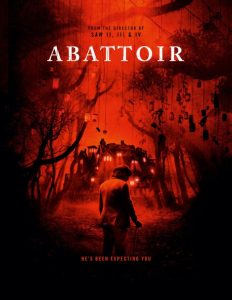 It’s never a scary film, but there is an automatic terror created in its disturbing concept that sees a man collect rooms from houses where people have met their grisly end. It’s a shame that Abattoir isn’t able to deliver the scares to match its levels of intrigue, because once we’ve seen the various deaths in the rooms that’s it. Alas, this isn’t driving to be the next scariest film in the world or another addition to the Saw franchise, so it is easy to appreciate the Darren Lynn Bousman’s change of pace and preoccupation with story over scares. The story is a simple and credible one with a woman’s need for the truth at the centre; her investigative personality is enough to cement her desire for facts and renders her a believable, interesting and strong leading lady. Jessica Lowndes plays her with an equal amount of passion and gutsy determination, creating an intelligent character that is easy to journey with. Her emotional attachment to the story adds an extra layer of drama to the story and gives the audience a reason to feel engrossed in her pursuit for the truth, no matter what it takes.

Simply, Abattoir is a solid, entertaining and creative endeavour that breaks down the walls of the horror genre before piecing it back together in its own twisted way. It is a stylish and visually impressive flick that may not be the nightmare it probably wishes, but it delivers an air of mystery and intrigue that ensures it never feels less than enjoyable.