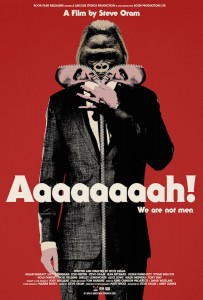 Synopsis:
Alpha Male Smith and his Beta, Keith, descend on a local community and hook up with Denise, a restless Female, disrupting the dynamic of her family group. Feuds with the family’s Males ensue.

‘Are we not men? Or are we simply beasts?’ questions the promotional material for Steve Oram’s funny, confounding and touching directorial debut. Oram, best known for his roles in Kill List and Sightseers (not to mention a strong turn in last year’s superb British chiller The Canal), has crafted a film that defies definition, despite telling what is in many ways a straight-forward story of modern life’s mundanities. That the characters are primates in human skin (living ‘human’ lives) and 100% of the dialogue takes the form of ape-like grunting becomes almost incidental.

Initially seeming like a stream of scenes that barely interconnect, Aaaaaaaah!’s story and character dynamics quickly reveal themselves. Arriving in a British town like any other, Smith (Oram) and Keith (Tom Meeten) muscle their way into the lives of a family whose ostracised patriarch (The Mighty Boosh’s Julian Barratt) lives a sad existence in the garden, replaced by the younger Ryan (Green Wing’s Julian Rhind-Tutt). The family are introduced with scenes of Ryan unpacking a new flatscreen, and wonderfully-named head Female Barabara (Toyah Wilcox) cooking dinner as per the cookery show she watches (pausing only to defecate on the kitchen floor). There’s a distinct feel of kitchen sink drama to these scenes, albeit with a decidedly fucked up, Daliesque twist. 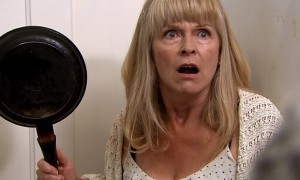 A central premise so absurd could easily wear thin come the halfway mark, but Aaaaaaaah!’s masterstroke is that it is played straight. It is frequently hilarious (many, perhaps even most of the laughs involving male genitalia), but characters’ motivations are clear, and there are moments of high drama, real tension and genuine poignancy. The performances are massively impressive without exception. Toyah Wilcox joyously mixes maternal calm with wide-eyed insanity and Oram exudes understated danger but it is Julian Barratt, as tragic fallen Alpha Jupiter, who leaves the strongest emotional impact. His gentle fingering of a Battenberg cake given to him by unsatisfied ‘daughter’ Denise is heartbreaking. Seriously. In fact, through all the nightmare surrealism, the clarity of character and plot makes for a number of moments filled with the kind of raw emotional punch often found in the kind of gritty Brit drama of which Aaaaaaaah! feels like a twisted and askew bastardisation.

The spontaneous, handheld camerawork reinforces the sense of gritty British cinema, as well as mirroring the clumsy, precarious temperaments of the primate Males, whose moods can turn wildly. Whether following characters or observing from a safe distance, the lurching camera also makes the film into something of a wildlife documentary. What makes this particular one so relentlessly unnerving though, is that the animal subjects look like us. They are perhaps a side of ourselves we wish not to face. In seeing familiarly commonplace societal dynamics reduced to this primal level, we are forced to question both our society, and our place within it. One of the reasons why subtitles are not necessary is that these characters are so familiar; we know the kind of thing they’d say. Everyone knows a Ryan, playing videogames and inviting people over for a grotty, student party while Barabara dutifully cleans up around him. And we’ve definitely all seen an Og, Ryan’s grubby, layabout Beta, even if we’ve not approached them. They’re not always fucking a mouse under a bridge, but hey, films don’t have to be 100% realistic. 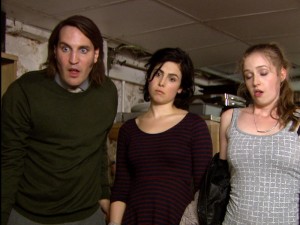 Released under the ‘Frightfest Presents’ banner, Icon‘s Blu-ray presents the film in 4:3, enhancing that documentary feel, as well as giving one of a home movie, implicating us into the depravity. We also get the full episode of the cookery show Barabara watches (a topless, surrealist nightmare version of Nigella Lawson hosts) and a full five minutes of the satirically mindless sitcom the Males love so much, as well as cast interviews and a rather good commentary with Steve Oram.

A massively original piece of work that commits admirably to its out-there premise, Aaaaaaaah! may be a little too rule-bending and esoteric for some. For others though, it represents what makes cinema exciting; a chance to be truly taken by surprise, to be challenged by a film that tests the limits of the medium itself. At once hilarious, sad, disturbing on an existential level and unexpectedly joyous, Oram’s discomforting film is one difficult to take your eyes from, even when those eyes are witnessing Toyah Wilcox wrapping her poo in cling film, or (spoiler) Noel Fielding getting his (prosthetic) cock ripped off. It is senseless and yet makes so much sense; obtuse yet razor sharp and though twisting reality, is worryingly relatable. Inhuman behaviour creating all-too-familiar exchanges and dynamics that you will want to deny recognition of. And that is perhaps the weirdest aspect of the whole spectacle; the unavoidable truth that it’s not actually that weird at all.