Synopsis:
Mary Shelley descends into an opium-fuelled fever dream while composing Frankenstein and carrying on a torrid love affair with Percy Shelley. As she writes, the characters of her novel come to life and begin to plague her relationship with Percy. Before long, she must choose between true love and her literary masterpiece.

One of the many reasons that the novel Frankenstein continues to hold and horrify us centuries after its publication is the myriad of interpretations it opens itself up to. That number only grows the more you learn about its creator, Mary Shelley, and her troubled life, from the death of her mother from an infection days after Shelley’s birth to the many heartbreaks that came from her own pregnancies, not to mention her husband Percy’s wandering eye.

The links between Shelley’s life and her literary masterpiece make her an attractive subject for a biopic, but this same multitude of interpretations also complicates the act of pinning down exactly where Frankenstein came from. With so many ingredients in the mix, compiling them all into a 90-minute stew becomes a near impossible task, resulting in some being left on the cutting board while others are poured with a heavy hand to fill in the gaps.

Such is the problem at the heart of A Nightmare Wakes, a beautifully shot but somewhat unsatisfying look at the birth of Frankenstein. Written and directed by Nora Unkel, making her feature debut, the film explores the fateful summer of 1816 when a group of friends, Shelley (Alix Wilton Regan) among them, gathers on the banks of Lake Geneva and Lord Byron (Philippe Bowgen) proposes they each write a horror tale. 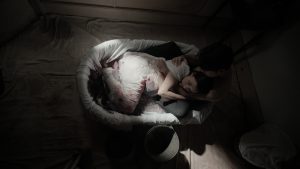 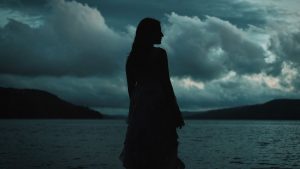 Soon after her arrival at Bryon’s home on the arm of her then-lover Percy (Giullian Yao Gioiello), Shelley suffers a miscarriage. Unkel wastes no time in establishing the link between Shelley’s reproductive trauma and the conception of her infamous novel: when she first experiences the pain that signals her miscarriage, she knocks over a pot of ink that mingles with her blood. Later, Shelley even begins to cry inky tears as her story becomes written in personal tragedy.

Where things start to fall apart are in the portrayal of Shelley’s burgeoning madness. The choice to portray her as a woman rapidly losing touch with reality makes sense in the context of a horror film, but as a story about one of the most influential female authors of all time—one whose genius was not understood in her own time and who continues to be disrespected to this day by those claiming Percy was the true author of Frankenstein—it feels disappointingly misguided. The decision to cast an actress almost twice the age that Shelley was during this period further robs Shelley of some of her power. Wilton Regan portrays the author with depth and thoughtfulness, but the very fact that Shelley was so young when she wrote the novel that helped birth a genre—especially during a period when women were not seen as equals—is part of what makes Frankenstein as truly remarkable as it is.

Still, Unkel seems to have a genuine love for her subject, and A Nightmare Wakes manages to do something that few recent Frankenstein narratives have achieved: present a unique and interesting look at the monster and its creator, which may in fact be the novel and its author. In the preface to Frankenstein’s third edition, published in 1831, Shelley described her most famous work as her “hideous progeny,” and Unkel’s film feels like the living embodiment of that sentiment—for better or for worse.