A New Creepy Clip from Regression 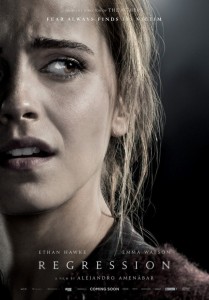 This new clip from Regression ticks all of the above boxes and makes for an intense watch. As Ethan Hawke’s character wanders around a shadowy basement listening to the creepy musings of Emma Watson, he sees vivid images of people in black cloaks, flashes of horrendous torture and eventually cuts the tape short when a baby is mentioned. Good idea. With a spooky backdrop of subtle, yet suspense-building music, it’s an effectively eerie 2 and a half minutes and works well at encouraging excitement and intrigue for the film. 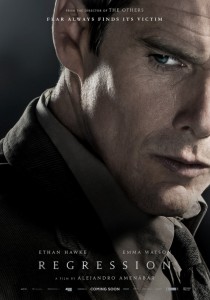 Synopsis:
Minnesota, 1990. Detective Bruce Kenner (Ethan Hawke) investigates the case of young Angela (Emma Watson), who accuses her father, John Gray (David Dencik), of an unspeakable crime. When John unexpectedly and without recollection admits guilt, renowned psychologist Dr. Raines (David Thewlis) is brought in to help him relive his memories and what they discover unmasks a horrifying nationwide mystery.

Alejandro Amenabar is in the director’s chair for Regression and you might recognise his name from The Others, The Sea Inside and Agora. He’s no stranger to horror, so I hope he can deliver us some genuinely terrifying, devil-worshipping horror goodness. Check out the clip – and the trailer – below.