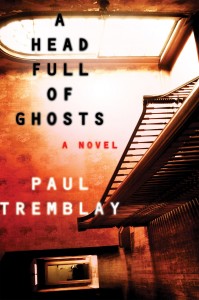 A Head Full of Ghosts is Paul Tremblay’s first foray into mass market horror and what a notable debut it is.

Eight-year-old Merry is telling us the story of her 14-year-old sister Marjorie who at first is thought to be experiencing schizophrenia but as we read it becomes clear that a mild form of “possession” is at play. There’s no split pea soup, spider-walking or 360 degree head turning here. The evil inside her is much more subdued and quiet, which makes it that much more chilling. Meanwhile, the girls’ family is in turmoil as depression and alcoholism plague the parents and a reality TV show to capture the pending exorcism has moved into the house.

While the novel is told mostly from the eyes of young Merry, perspectives shift as it’s also told from the viewpoint of a fan blog that documents the reality show and also 15 years in the future as Merry is interviewed for an upcoming book. Family secrets and juicy bits of behind the scenes “footage” are uncovered.

With one hell of a shocking ending, Tremblay takes the classic exorcism story, turns its’ proverbial head around and gives us something so fresh and exciting that it wouldn’t be a surprise to see this title on awards lists this year.

Often times humorous, touching, and tender, A Head Full of Ghosts is a downright chilling novel that will stay with you long after that final page is read. Simply put, it’s one of the best books of 2015.