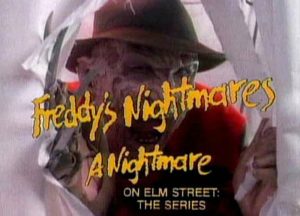 Slasher icon Freddy Krueger couldn’t have been any hotter back in the late 1980’s. The character had evolved from the mysterious, terrifying dream stalker of Wes Craven’s A NIGHTMARE ON ELM STREET to the cartoonish prankster who loved to deliver literal killer punchlines before offing his victims. By the time 1988 rolled around the fourth movie THE DREAM MASTER had grossed a then franchise high of $49 million in the U.S alone. Despite being an utterly irredeemable, child murdering POS, audiences couldn’t get enough of Freddy – and series owners New Line Cinema couldn’t get enough of the money they were raking in.

They cranked out Freddy merch and memorabilia in every possible format, from music albums and video games to dolls and children’s pyjamas – which is disturbing on many levels. New Line soon had the bright idea to develop a television series called FREDDY’S NIGHTMARES to milk the character a little more. It was decided to make it an anthology with Freddy appearing as a Crypt Keeper-style host, but with an occasional featured role within a few episodes. It was decided early on FREDDY’S NIGHTMARES would not have a conventional plot where Freddy just stalks a fresh bunch of teens, since it would limit the stories that could be told and would feel stale compared to the movies.

The series was pitched as a dark, serious horror show, but New Line wasn’t willing to splash out on it. The budget and shooting days were reduced as production rolled on, and production quality dipped fast following the first 7 or 8 episodes. The show used mostly unknown actors, though a few – namely Brad Pitt, Kyle Chandler and Lori Petty – would become bigger names down the road. It was also decided the first episode would cover Freddy’s origin, which happened off-screen in the movies. The pilot was supposed to set the tone for the show, so New Line called on a big name to kick things off right.

By the time Tobe Hooper landed the job to direct FREDDY’S NIGHTMARES pilot episode NO MORE MR NICE GUY his movie career wasn’t in terrific shape. His trilogy of Cannon movies (LIFEFORCE, INVADERS FROM MARS, THE TEXAS CHAINSAW MASSACRE 2) all failed to make money, and the lingering POLTERGEIST controversy – where some believe it was really producer Steven Spielberg who deserved directing credit – still hung over his career. Hooper decided to head to television for a while, where he directed an episode of both AMAZING STORIES and THE EQUALIZER. It certainly wouldn’t hurt the credibility of FREDDY’S NIGHTMARES to have a horror legend direct the pilot. Plus, it was also a reunion for the director and Englund, following 1977’s EATEN ALIVE. 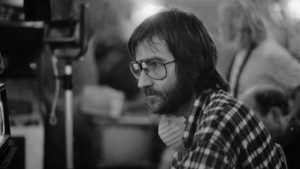 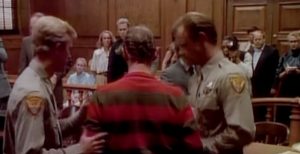 The pilot is quite dated in terms of visuals and completely contradicts things NIGHTMARE fans know about Freddy from the movies, but Hooper still crafted a creepy, tense episode. NO MORE MR NICE GUY opens with a news report that gets interrupted by a signal – complete with Freddy’s trademark red and green stripes – before taking viewers back to the day he was acquitted of the child murders. Hooper keeps human Freddy’s face in shadow the entire time, though there’s no mistaking Robert Englund’s distinct profile. Despite clearly being guilty as hell, Freddy’s stereotypical evil lawyer provides proof his arresting officer failed to read Krueger his proper rights. Freddy is released and the angry parents blame poor arresting officer Lt. Blocker (Ian Patrick Williams) for everything.

Freddy wastes no time going back to his old ways, returning to his boiler room to don his famous glove. He decides to pay a visit to Blocker’s twin daughters, leading to an effective stalking sequence from Hooper. The angry parents have formed a vigilante mob to track him down though and manage to save Blocker’s daughters in time. The parents eventually track Freddy back to his boiler room, where he taunts the cop into killing him. The distraught Blocker pours petrol on the mocking killer and sets him ablaze, but his nightmares are literally just beginning. 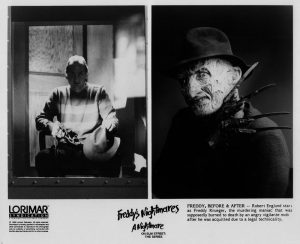 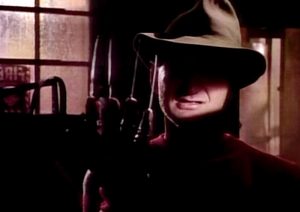 One distracting element about this episode is a lack of characters from A NIGHTMARE ON ELM STREET; namely John Saxon’s Lt Thompson, who in the movie was part of the gang that burned Freddy and hid his body. Maybe Saxon’s fee was a little high for the show to afford, or New Line decided to rework Freddy’s origin for the series. Sadly lead actor Ian Patrick Williams is pretty stilted at times, though Hooper’s gradual tightening of the noose around the character is what makes it work. The guilt Blocker feels over Freddy’s murder slowly drives him crazy, and there’s a nice air of anxiety hanging over the second half of the episode while viewers wait for Freddy’s return.

One thing Hooper excelled at was building a slow, suffocating sense of dread in his work, which was best seen in THE TEXAS CHAINSAW MASSACRE. While NO MORE MR NICE GUY is nowhere in the same league, the director knows how to gradually tighten the screws like a pro. The show suffers a little from the dated colour scheme established by the movies – lots of bright reds and greens are used for the dream sequences – but for the most part, the show plays things straight. Sadly the series also peaked early in terms of quality and despite Hooper’s work setting the tone, FREDDY’S NIGHTMARES failed to top it with later episodes. 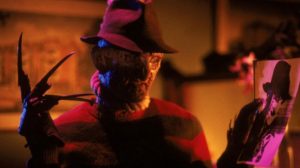 On the whole, the show is considered something of a nadir for the franchise. Freddy’s popularity dipped quickly following the underperformance of fifth movie THE DREAM CHILD, leading to the franchise briefly being retired with 1991’s woeful FREDDY’S DEAD: THE FINAL NIGHTMARE. FREDDY’S NIGHTMARES didn’t last long either, running for two seasons before being cancelled in 1990. While it served as a handy testing ground for up and comers like Mick Garris, Dwight H. Little and William Malone, the show is mostly forgotten now, and those who remember it don’t look back fondly. Still, Hooper proved with his pilot that even with a low budget and intense time constraints, he was more than able to craft something distinctive and eerie. It’s a shame he didn’t get to work on an actual NIGHTMARE ON ELM STREET sequel, because on the strength of this, he would have nailed it.