8-Legged Freaks in the Poster for AHS Season 6

If spiders creep you out then you might want to avoid this new poster for American Horror Story season 6. It’s a simple, but very freaky poster that shows a woman with spiders crawling from her eyes like ultra-long eyelashes. The idea of that alone is enough to send shivers down our spines. 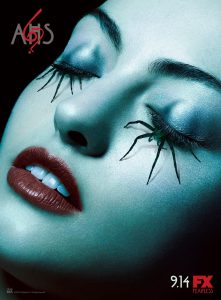 The theme was recently announced for the new season of the show and it will be going back to the sixteenth century. However, the story will also feature events in the present and much like previous seasons of the show; it will put a spin on a story that is grounded in reality.

Little is known about the new season, but we do know that Lady Gaga will be returning after her success in Season 5’s Hotel. The show is set to start airing next month, so prepare for cast announcements, footage and more imagery from the film over the next few weeks.