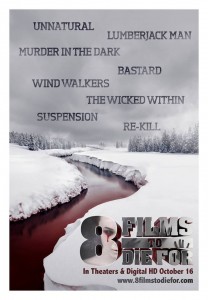 With one month remaining until After Dark Films’ “8 Films to Die For” collection rises from the ashes a promotional trailer was unleashed on lucky attendees at the recent Long Beach Comic Con event.

The final lavish rundown of films is as follows:

RE-KILL
Directed by Valeri Milev and starring Bruce Payne and Scott Adkins, Re-Kill is set 5 years after an outbreak that infected most of the world’s population but the war between Re-Animates (Re-Ans) and Humans still rages. Within the few remaining inhabitable cities, Re-Ans are segregated into “zones” policed by R-Division soldiers who target them in hopes of quelling a second outbreak. “R-Division, Frontline” is the #1 TV show in the Post-Apocalyptic world. Weekly, the show follows different R-Division units as they work to keep America Re-An free. Jimmy, a videographer for the Outbreak Network, thought this week’s episode would be like every other. But through his eyes and his camera, we see raw footage of what just may be mankind’s last days.

MURDER IN THE DARK
Directed by Dagen Merrill and starring Luke Arnold and Phil Austin, when a group of young people camping in the ruins of a medieval Turkish town play a party game called ‘Murder in the Dark’, they soon discover that someone is taking the game too far…’ The film was produced in an experimental shooting style and not a single member of the cast involved was allowed to see the script. Accordingly, the actors’ choices interactively changed the shape of the story and they had to use clues to solve the mystery laid out before them by the filmmakers.

SUSPENSION
Directed by Jeffery Scott Lando and starring Ellen MacNevin and Sage Brocklebank, Emily (MacNevin) plays a high-school student with a penchant for drawing gruesome pictures in her sketchbook. There’s a reason for her obsession with horrific images: Her father Tom once went on a murder spree and is now residing in a mental hospital. On a night she’s home alone babysitting her mute little brother, Tom escapes and targets Emily and her friends during a bloody killing rampage.

LUMBERJACK MAN
Directed by Josh Bear and starring Michael Madsen and Hector Becerra, the film follows the staff of Good Friends Church Camp as they prepare for a spring break filled with “Fun Under the Son”. During the preparations a demon logger rises from his sap boiler to wreak his vengeance and feast on flapjacks soaked in the blood of his victims.

WIND WALKERS
Directed by Russell Friedenberg and starring Zane Holtz, Glenn Powell and J. LaRose, a group of friends travel to the remote Florida everglades on a hunting trip only to discover that an ancient, malevolent curse is tracking them.

THE WICKED WITHIN
Directed by Jay Alaimo and starring Sienna Guillory, Gianni Capaldi and Eric Roberts, The Wicked Within sees a family reunite after a child’s untimely death and there is an unseen spirit crying out to be heard. The presence is a demon playing a sinister game of truth or dare and one by one, it forces each family member to admit their long-hidden sins and face the consequences.

All eight films will be released in theaters through ‪‎After Dark Films‬, and released on Digital HD through Fox Home Entertainment.