Synopsis:
Liza manages to convince her boyfriend Chip to help her steal $68,000, but when Liza starts killing people Chip realises he’s made a terrible mistake and that his girlfriend is not quite who he thought (or hoped) she was. 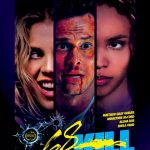 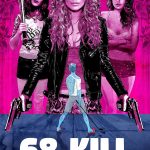 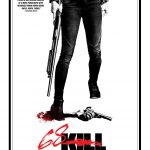 68 Kill is an absolute blast. The film is a violent and entertaining crime-caper, but beneath its genre guise there lays a comprehensive and intelligent commentary on femininity and masculinity. If you’re willing to go along for the bumpy and bloody ride, you’ll find 68 Kill to be one of the funniest and most surprising films of this year. If you thought Chop offered thrills and spills of the highest quality, then you’re going to have your socks knocked off with Treent Haaga’s latest.

As the badass, bossy and takes-no-shit Liza, AnnaLynne McCord continues to prove that she is one of the most exciting actresses working today. She effortlessly embodies her exaggerated example of feminism, where women rule the roost and men are just mere pawns in their game of life, death and money. Don’t forget the money. Liza is driven by her want to be rich, but rather than be paintd as the money-hungry bitch that she could so easily have been, Liza is seen as desperate to escape her lacklustre life that sees her sleeping with men for money. Her boyfriend Chip, quite literally, shovels shit for a living and thinks telling Liza how beautiful she is and how much he loves her is enough to keep her happy. Liza is not that kind of woman. She wants more and is afraid to stop at nothing to get what she wants.

Liza and Chip embark on a fool-proof plan to rob her sugar daddy of $68,00 but shit hits the fan when Liza cuts his throat, kills his wife and shoves a young woman they find in the boot of their car. Like Bonnie and Clyde ramped up to 1,000, the pair head on an absurd and unbelievably violent road trip where you’ll never be quite sure what will be waiting round the next bend. 68 Kill becomes a ridiculous rollercoaster ride of exploitation with people being shot in the face; limbs flying everywhere and a brother who’s in to incest and amateur surgery on the women who are sold to him. There’s Sheila Vand as a heavy-eyeliner-wearing non-emo who has her own darkness bubbling within and Alisha Boe proves she can be more than just a victim in 13 Reasons Why. The cast are a phenomenal bunch who explode on-screen to give this film the vicious bite it needs to convince. 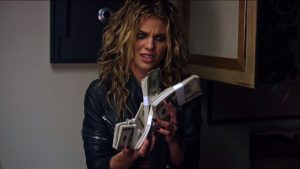 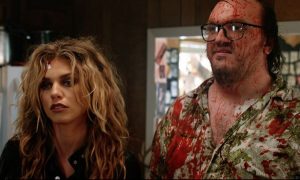 The only character without the bite needed to survive is poor Chip. Played heroically by Matthew Gray Gubler, Chip is the film’s hilarious and horrendously negative representation of the everyday man. He’s a quivering wreck and someone who just wants things to be simple. He thinks his life’s complete, because he has a pretty lady by his side and is devastated to discover he’s been fooled by the Halo effect. For the audience, it is twisted and satisfying to follow him on his unlucky journey where he finds himself caught up in situations that are impossible to describe. You have to see it to believe it and 68 Kill, will make sure you see every moment in its beautifully graphic glory.

It’s a narrative nightmare and there are flaws a-plenty. It goes from beat to beat and cares very little about what’s come before, or how we got from A to B. The story is not what 68 Kill is about; it’s about the stupidity of men and the rose-coloured glasses they wear when a beautiful woman is around. It’s about men who are afraid of women when they’re not the innocent little flowers they hoped they would be. It’s about women who do what the hell they want, and to hell with anyone who tries to stop them. In 68 Kill everything is blown out of proportion; it’s not a realistic depiction of absolutely anything. It’s a strangely symbolic and metaphorical exploitation tale that waves a bloody and tasteless flag for women everywhere, but manages to end on a note where no one is painted in a particularly perfect light.

If you’re after something ridiculous, fast-paced and wholly unpredictable, with death and destruction on every corner, then 68 Kill will deliver on every count. It’s mad and it’s messy, but 68 Kill is destined for cult status and marks Trent Haaga as genre film-maker to keep an eye on.