There are two kinds of people in the world. Those who hate everything that the Sharknado franchise stands for and the other, people who unashamedly hold a special place for the cringe-inducing disaster phenomenon. Knowing exactly what it is at all time, the Sharknado franchise has gained its notoriety because it never takes itself too seriously and it encourages its audience to suspend all disbelief and kick back with an over-the-top adventure that will keep a smile on their face.

5harknado: Global Swarming is the latest instalment of the franchise and sees Anthony C. Ferrante return to the director’s chair to deliver even more outrageous hijinks. After the events of the previous four films have left much of the US in ruin, our favourite chainsaw-wielding hero Fin Shepard (Ian Ziering) and his bionic wife April (Tara Reid) and their son Gill visit London. However, when a Sharknado starts to devour the city Gill finds himself sucked up into the Sharknado causing Finn and April jump into action and chase the storm across the planet with pitstops in Australia, Brazil and Rome.

Keeping the cheeky spirit of the film well and truly alive, Iain Ziering and Tara Reid return as Fin and April Shepherd. On screen this duo do a great job to keep audiences laughing with their deadpan delivery and flawless ability to keep a straight face at all times. Joining them after her absence from Sharknado 4 is Cassandra Scerbo. As Nova, Scerbo is now the leader of an elite group of fighters who have made it their sole purpose to save the world from Sharknados with a plethora of advanced tech gadgets.

Like any decent Sharknado adventure, Global Swarming comes with its own fair share of blink and miss it cameos. This time round audiences can expect to see An American Werewolf in London’s very own David Naughton play Ambassador Kessler. Meanwhile, other cameos include Chris Kattan, Katie Price, Olivia Newton-John, Tom Daley, Margaret Cho, Bret Michaels, Abbey Lee Miller, Tiffany Pollard but none of them are as exciting as seeing the one and only Dolph Lundgren. 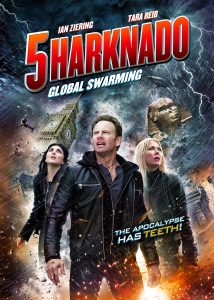 Overall, the entire franchise has come a long way since it’s humble beginnings and has morphed from disaster movie into an established sci-fi saga. That said, there’s nothing amazing about the Sharknado franchise and this instalment is no exception. On the surface, it is a heavily flawed mess of a movie and if you’re not already a Sharknado fan then there is nothing for you here. However, if you are a fan, you’ll know very well to look beyond it’s blinding pitfalls and just enjoy every minute for what it is… a brainless adventure of epic proportions! Afterall, fans know Sharknado does nothing but to remind us all that life shouldn’t be taken so seriously all the time. Have fun along the way and that is a lesson we can all benefit from!

Oh… don’t forget that SHARKNADO 6 will be coming out later this year!

Disappointingly, there are none!