PRETTY BOY, the follow up to Marcel Walz’ fun, gory and creepy BLIND (2019), has just completed Post Production with Company 3 (Joker, Wonder Woman) and we’ve got our hands on the first selection of exclusive stills and behind the scenes photos.

Walz returns to helm, as does writer Joe Knetter, with the former revealing that, “As an LGBTQ Director, Walz remarked at could go crazy on set design for the Valentine’s party and overall theme in the movie, so be prepared for a lot of pinks, glitter and some intestines. Lol!“ Commenting on how the follow up is a direct sequel but very different in tone, Knetter added, “BLIND is our version of a slow-burn ’70s style drama/suspense film. PRETTY BOY is a total ’80s horror slasher.”

PRETTY BOY stars Sarah French (Blind), Heather Grace Hancock (Wicked City), Devanny Pinn (The Dawn), Robert Rusler (Weird Science, A Nightmare on Elm Street 2), Maria Olsen (Percy Jackson and the Olympians), newcomers Jake Red and Andrew Rohrbach, and, of course, Jed Rowen as PRETTY BOY. Whilst there is no official scheduled release date, Walz has confirmed with us that the film will come out this year.

In the meantime, we’ll leave you with the aforementioned stills: 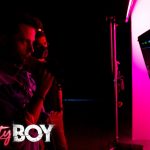 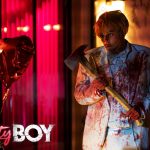 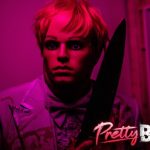