31 was released a lifetime ago – or so it feels like – but, the soundtrack has been yet to make it to the shelves. Until now, that is. Rob Zombie has finally officially unleashed the soundtrack to his clown torture horror 31 and it features tracks by The James Gang, The Mama & Papas, Lynyrd Skynyrd and more.

Additionally, the collection features the infamous monologue’s from 31 character Doom-Head (Richard Brake). You can stream the soundtrack right now on Apple and Spotify, but if you want to get your hands on an epic physical edition, Amazon has an awesome vinyl for sale if that’s more up your street. 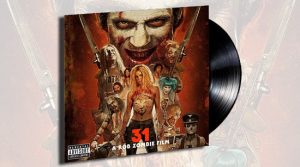 Synopsis:
From the visionary mind of Rob Zombie comes the horrific story of five carnival workers who are kidnapped on Halloween and held hostage in a large compound.  At the mercy of their captors, they are forced to play a twisted game or life or death called 31.  For the next 12 hours they must fight for their lives against an endless parade of homicidal maniacs.

We weren’t massive fans of 31, but we did applaud its creative kills and striking visual style. You can check out our full review right here.