Synopsis:
In Arizona 1876, Marshall Frank Wilcox (Paul Winters) treks through the desert to the small town of Crumpit with the captured outlaw George Rivers (Jarod Anderson) at his side. But a curse bestowed on the town by an innocent man, sentenced to death, sees the dead return from the grave with an appetite for living human tissue. Meanwhile, a small clutch of villagers become barricaded in the local saloon and plot their escape from the flesh-eaters. 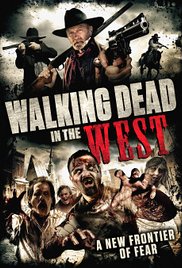 This unfathomably rubbish zombie western, marketed as a limp cash-in on the Walking Dead series’, is a lumbering, inept clutter of amateur acting, cut-rate effects (defective squibs and latex) and a dithering narrative. In the hands of more established film-makers, a decent zombie western could be an exciting prospect right now. Even though there already a few in existence (The Quick and the Undead, Undead or Alive, A Fistful of Brains, Dead Noon etc), none of the above have been crafted with gumption, bravado or successfully melded the genres in a manner that will neither make a mark in horror film history or in the hearts of fans. But, at present, it’s hard to imagine any director doing worse than Walking Dead in the West: the sub-genre’s latest dog-eared excretion.

This horrendously botched slog of a plot sees the west-set dead dragged back to life by a wrongly accused criminal, while waiting to die at the gallows. A set up unfurls via pedestrian performances adorned by stock costumes (which look a tad too clean and superficial), cardboard characters, stale dialogue and a doddering shoot-out. The story follows an intro narrated by the grizzly old western protagonist/ archetype Marshall while riding through the desert before battling a gaggle of bandits. This fisticuffs/ bout unravels with the élan of two drunk friends wrestling in the street after a night out down the pub, by way of some playground choreography, which instils the wrong kind of dread from the outset. Frank introduces himself with a worn-out grouch and an Eastwood/ Palancian snarl. On the way to Crumpit, he encounters the surly Sergeant Bale, of the US army. The two bond but the promise of further screen camaraderie is wasted. Instead the story veers into some massively slipshod action/ violence and pantomime death with risible effects and the most pitiful zombies to have ever soiled the silver screen.

The plot picks up with a pack of villagers, who take refuge in a bar while the dead flap about  pathetically in the street outside while nonchalantly chomping on limbs with the wrath of a lazy, stoned teenager and a pie. The story swiftly flits back and forth from the commotion in the town to the tale of Marshall Wilcox and the Outlaw George Rivers. The couple rescue and befriend an apache Indian then journey to meet the crew in Crumpit. Almost forgettable supporting characters include a couple of generic youngsters, a rickety priest and a midget barman, while the makeshift flesh-eaters slump about the backdrop stopping only to maul or get shot. The cast and crew make no attempt to deliver anything remotely resembling decent performances, while terrible effects (red wine/ ketchup stained white shirts and ineffective squibs) add zero garnish to this stale, trait-laden palette.

It’s hard to tell if the film-makers are playing Walking Dead in the West for laughs or simply failing miserably at crafting affective horror. One scene featuring a gnashing zombie salivating over a looming bystander, from a noose, may raise a slight smile along with a brief moment when a little girl ghoul goes for Jasper (the midget barman), but none of this is remotely terrifying. Appalling drama between the battles, does little to deepen the characters or further the narrative. Cowboys and the apache eventually shake hands while the Marshall sprouts shudderingly slapdash dialogue like: “I learned early on in my life that the only thing that could stop a bad man with a gun, was a good man with a gun”.

While watching WDITW, you may find yourself staring through the screen and reflecting on your own existence and what the hell you’re doing with it, only to find your attention snap back to reality and discover nothing has changed. While we wait desperately for a decent zombie western film, the only seeming purpose of this amalgamation/ abomination is to fill frustrated wannabe film-makers with hope in the knowledge that if something this dreadful can find financial backing, surely there’s a chance.