Lilith is an apocalyptic tale set both on an aircraft carrier and across the city of New York. It was nice to read a novel with such a wide scope and implications, since most of my recent reads have been in small-scale settings. The author has grand ambitions and sees them through well. The story follows Lilith, a Lilitu (you’ll have to read the book to fully understand what that means), as she infiltrates a giant super-aircraft carrier, the USS Ford, as part of a media visit. She aims to take control of the ship and use the nuclear reactors to irradiate her body, which will trigger her evolution into something more powerful. That’s not to say that she’s not powerful already.  She already has the ability to create a devestating hurricane and send it into an unprepared New York. Having lived through Hurricane Katrina in New Orleans, I was brought right into the story. Thankfully, the focus seems to shift quickly from the hurricane devastation, with residents for the most part evacuated and the city abandoned.

I really enjoyed the first half of the book, which is set within the tight confines of a ship at sea.  As more of the crew become infected by Lilith’s parasite, the tension escalates. You get a sense of being trapped, with some of the crew out to sabotage the ship and potentially destroy it. These parts of the book work so well as a thriller, that even without Lilith, I imagine the storyline would have worked just as well with any other terrorist. Never fear though – there is plenty of supernatural and horror involved, and it doesn’t take long before the body count and level of violence rise. 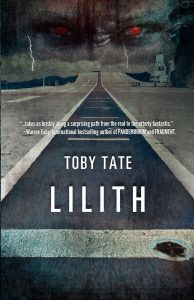 The main characters are Lilith, her brother Mac (also a Lilitu), journalist Hunter Singelton and Singleton’s wife, Lisa.  Hunter and Lisa made their debut in Tate’s first book, Diablero, which I admit I haven’t read yet. Hunter is a stand up “good guy” character. Lisa’s role is primarily to provide Hunter’s motivation. When Lilith suddenly chooses Hunter as a mate, it seemed to come out of the blue without any real reasoning behind it.  Her obsession with him didn’t quite sit right with me. That said, Lilith takes the idea of the femme fatale to a new level. She is very effective while she is still under cover, using her beauty and feminine wiles to spread her parasite. After her evolutionary change, the story becomes something different altogether.

The metamorphosed Lilith turns the rest of the novel into a monster tale.  I didn’t find it as engaging as the first half of the book. The action shifts to New York, with Special Forces hunting Lilith in a race against time.  Their aim is to save the city and its inhabitants from a nuclear bomb that Lilith and her fanatical followers have set to detonate.

All in all, it was an entertaining read, with the suspense of the first half more intriguing than the action packed second half. It is nicely set up for a sequel, so maybe we’ll see what else the Lilitu have in store for us.