Synopsis:
A bed possessed by a demonic force devours helpless victims. A series of vignettes explain the beds backstory, and showcase its killings, all told by an artist trapped within a painting. 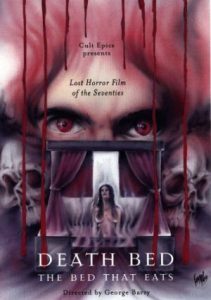 One time director George Barry’s Death Bed: The Bed That Eats is without a doubt one of the strangest films you’ll ever come across. Although filmed in 1977, it only recently saw the light of day in 2004. It’s since been catapulted into the realm of cult status, gaining a loyal following. Deservedly so–it’s bizarre, atmospheric, and nothing exists that you could quite possibly compare it to. However, there’s no getting around the fact that it’s a bad movie. As is the case with any art form, one mans trash is another mans treasure. After all, beauty is always found in the eye of the beholder.

Death Bed is a collection of stories that are loosely tied together with one another. Our host into this world that defies all logical explanation is a painter, confined within one of his own creations. Aside from serving as the storyteller, he also constantly addresses the bed, and talks to it as if it were a person, thus giving the bed a life of its own. The plot itself is subdivided into four sections aptly entitled Breakfast, Lunch, Dinner, and The Just Dessert. This unique avant-garde narrative gives it the look and feel of an art-house film, but with the content of an exploitation piece from the time period. 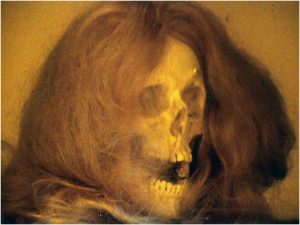 Although this might be on the more intriguing and entertaining aspects of the film, it’s also one of its downfalls. The continuity of the vignettes is certainly present, but focus is quite conspicuous by its absence. It jumps around and shifts so often, that at times it resembles the appearance of a jumbled mess rather than an art-house endeavor. In some ways, this also works in the films favor, as it gives off the impression that you’re watching someone’s dream (or nightmare) unfold. It also strengthens the strong detachment from reality that comprises most of the story.

It’s these same elements that give Death Bed its distinctive atmosphere. What it lacks in story and continuity, it makes up for with feeling, imagery, and mood. This is further extenuated by the minimal soundtrack and use of natural light. It’s quite comical and ridiculous at certain points, yet it never once becomes self-aware. From beginning to end, Death Bed takes itself completely seriously; one cannot help but admire that level of ambition.

Much of the real campiness within the film can be found in the bed itself, as well as the deaths of its unwilling victims. The effects utilized in the killing sequences can only be described as laughable and low budget, and at the same time wildly entertaining. The bed devours victims by engulfing them in orange foam, and dissolved in an acid like substance. To top it off, the bed slurps, chews loudly, and even breathes heavily whilst in a fit of hunger. In all fairness, it would be almost impossible to turn an inanimate object into a villain, and be taken seriously at the same time. 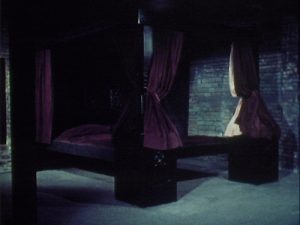 Death Bed is certainly something you won’t forget about after your first viewing. Despite its many flaws, it’s an endless source if entertainment. It certainly deserves its place in the ‘so bad it’s good category.’