There is no shortage of books that focus on horror films’ golden age of the 1970s and 1980s. Keesey brings us right up to the present with a look at horror films since 2000. Horror films reflect the social issues of the time, so it’s interesting to see this examined so currently.

The book covers over 100 films. For each entry, the author gives a synopsis and then explores the wider meanings represented with the film. The book is divided into three major sections.

Nightmares – This is a look at films that examine the more traditional horror staples, such as zombies, haunted houses, or dolls. Films in this area, for example under “Mother related horror,” include The Babadook and Inside.

Nations – This section is a global look at horror films and movements from a number of countries. I really enjoyed this section of the book since it covers titles that are sometimes overlooked. There were some obvious choices, including Wolf Creek for Australia and Dead Snow for Norway. However, the selections it highlighted from Iran, India, and Hungary are new to me so I’ll now seek them out. 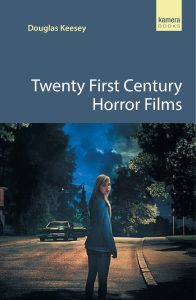 This isn’t a “best of” book. The focus is on what each film says about our society and the times we live in. It also offers a look at the movements in horror over the last 17 years. It covers a lot of films with thought provoking insight from the author. With the limitations set by such a short time period, movies are discussed here that may not warrant inclusion when retrospective books are written about this era of horror films in the future. This book has interesting things to say and if you enjoy reading about horror films, you should like this.