It’s been a long time coming but Film4 FrightFest finally returned to London’s famous Leicester Square to take over the VUE West End between the 27th and 31st August for five days of blood, screams and terror. Featuring seventy-six films across six screens over five days, FrightFest prides itself on offering audiences a carefully selected line-up of the best genre titles around at the moment.

Last year’s line-up was incredible and included films such as The Guest, Starry Eyes, Late Phases, Exists, Digging up The Marrow, Dead Snow 2: Red vs. Dead, Life after Beth and Eli Roth’s cannibal shocker The Green Inferno. Guests attending the festival included Adam Wingard (The Guest), John McNaughton (The Harvest), Essie Davis (The Babadook), Adam Green (Digging Up The Marrow) and the guest of honour was none other than Freddy Kreuger himself, Robert Englund.

Unsurprisingly, Alan Jones, Ian Rattray, Paul McEvoy and Greg Day, known to festival goers as the Four Horsemen of FrightFest, have put together another killer line-up yet again including such films as TALES OF HALLOWEEN, WE ARE STILL HERE, TURBO KID, DEATHGASM and TALES OF HALLOWEEN. With no repeats throughout the course of the weekend it was painfully obvious that some incredibly tough decisions would have to be made.

With mere minutes to spare before showtime, I took my seat and took in the surroundings at the packed auditorium that was buzzing with excitement. It was at that moment that Jonathan Ross took to the stage to officially open the festival. He discussed his love of horror and for FrightFest and he was met with the famous eardrum-bursting FrightFest applause. 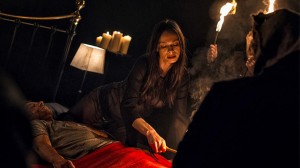 Up first was David Keating’s witchy thriller Cherry Tree. Starring Naomi Battrick, Patrick Gibson and Anna Walton, Cherry Tree tells the story of high school student Faith (Battrick) who discovers that her father is dying. Desperate to save her father’s life she teams up with the head of a coven of ancient witches and is tricked into carrying the child of the devil. An interesting premise but not so smartly executed, Cherry Tree is a film that held my attention but, as a whole, felt disappointingly average. After the screening director David Keating took the stage to field a Q&A with his cast including Anna Walton. 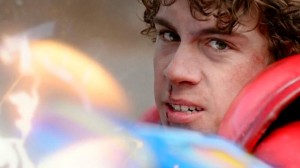 The second film of the evening was none other than the hotly anticipated Turbo Kid. In what is best described as Power Rangers meets Mad Max, Turbo Kid was written and directed by the three-headed dragon that is François Simard, Anouk Whissell and Yoann-Karl Whissell. In the film Munro Chambers plays The Kid, a teenage scavenger. After his friend Apple is kidnapped by the evil Zeus (Michael Ironside) and his sadistic side-kick Skeletron, it is up to Turbo Kid to save the day. Not only was this film incredibly entertaining but it took me right back to my childhood. There was nothing about this film that I didn’t like and I really can’t wait to see the film again and again. 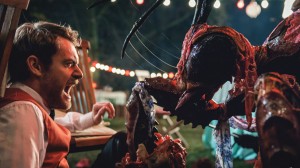 Rounding up the night was Benni Diez’s monster wasp movie, Stung. Lance Henriksen, Jessica Cook and Clifton Collins Jr. are all present at a garden party hosted at a remote mansion. After a colony of killer wasps are unearthed the party is quickly killed off after a vicious attack but that’s only the beginning of the nightmare as those that have been stung begin to mutate into seven foot tall predators. Stung offers audiences a plethora of silly one-liners, spectacular special effects and some pretty nasty shocks making it a perfect film for the late night slot.

Looking back at the evening’s entertainment the film of the day was without a doubt François Simard, Anouk Whissell and Yoann-Karl Whissell’s bonkers apocalyptic adventure Turbo Kid. Be sure to catch it when it is released across all VOD platforms from 28th September and on DVD from 5th October. Also, if Stung has your interest pinned then be sure to check it out from 26th October.