Not only was it sad to wake up on the final day of FrightFest knowing the festival was coming to an end but it was utterly heartbreaking to learn about the sad passing of Wes Craven. Not only was he responsible for introducing me to the horror genre with A Nightmare On Elm Street but he’s been responsible for some incredible horror films including The Hills Have Eyes, The People Under the Stairs and Scream. So, with a heavy heart, I made my way over to the VUE West End to start the day. 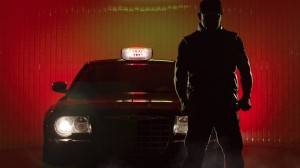 On my arrival it was time to head straight up to the Horror Channel screen to check out Julian Seri’s stylish thriller Night Fare. Essentially combining the best elements of Maniac Cop and Taxi Driver with a slight Refnesque twist, Night Fare tells the story of two men that duck out of a Parisian taxi cab without paying the fare. Soon after, the duo realise their mistake as the sociopathic driver will stop at nothing to recover his fare.

Very dark, slick and slightly sexy, Night Fare is a fantastic thriller. As a massive Nicholas Winding Refn fan I was in heaven as Seri has channeled the aesthetics of Drive and turned up the gritty violence and wrapped it all up with a gorgeous synth soundtrack from Alex Cortés. As you can imagine, I had a lot of fun with this film. It’s brilliantly paced, the action is heart-racing and the tension is so thick at times it feels almost claustrophobic.

Strangely enough Seri also introduces a segment in the film told entirely through anime. If you think of the Oren Ishi segment in Kill Bill then you will know what I’m talking about. I won’t tell you what this scene is about but I think it is a very interesting choice made by Seri and, just like in Kill Bill, this scene perfectly compliments the film and adds to its charm. Speaking of which, Night Fare’s charm ticked every box for me and for that reason it cemented itself firmly on my list of favourite films seen at the festival all weekend. 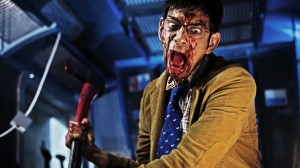 Next it was time to venture into the Discovery screen again except this time it was to attend the UK Premiere of Paul Hyett’s lycanthropic chiller Howl which stars Ed Speleers, Shauna MacDonald and Rosie Day. The plot of the film follows Joe (Speleers), a young ticket collector asked to work the night train leaving Waterloo. He reluctantly takes the job and is stranded with the few passengers when their train grinds to a halt. After the driver goes missing without a trace the group must stick together to survive the night when a werewolf attacks their train.

As you would expect from any Paul Hyett film, Howl is a gruesome and tense roller coaster ride. Packed with incredible creature effects the film moves along at a steady pace and does a great job to keep the audience engaged and on the edge of their seats. The majority of the cast are equally as good. Speleers does a fantastic job in the lead of the film going through the journey from zero to hero. Shauna MacDonald plays a workaholic with a heart of gold under her frosty exterior and equally puts in a solid performance. However, Rosie Day’s character is so annoying and is the epitome of that one person on the train that you just want to give her a big almighty slap.

Thankfully (spoiler alert) Hyett fulfills my wishes and serves up a very fun and inventive monster movie that shows very little mercy for the characters within it. As for the werewolves the work he has done to bring them to life is incredible. Instead of opting for a simple werewolf suit, Hyett has employed creative practical effects and polishes them off with the smallest touches of CGI that perfects the look. They look mean, they look nasty and they look bloody fantastic. I had a blast with Howl and I think that fans of Dog Soldiers and An American Werewolf in London will have a howling good time with this one.

Following Howl it was time to venture into the Phoenix Artist Discovery screen to experience a film that comes with an unmissable reputation. During its premiere at Montreal’s Fantasia International Film Festival, Bite was reportedly so graphic that audience members felt unwell during the screening and an ambulance was called to tend to some of the viewers. So at a festival, where the majority of attendees are hardened fans of such stomach turners like Cronenberg and Eli Roth, I did wonder if Bite would have the same effect again. 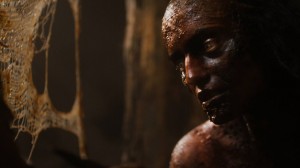 Speaking of which, Bite is the story of bride-to-be Casey who goes on holiday with her bridesmaids to celebrate her last days as a free woman. During a excursion to a nearby waterfall she is bitten by an insect in the water and soon after begins to experience a nasty reaction. Convinced it is a simple bug bite she returns home with her friends but she soon discovers that she is slowly turning into a human-insect hybrid.

Although an interesting slice of body horror with a very creative design process, Bite didn’t quite lock its jaws on me. I thought it was a visually impressive film as the creature effects were gross and certainly different to what is usually seen on our screens. However, the same effects don’t really go past the same make up you see on the promotional poster and this is what bugged me the most.

Much of the creature design is hidden by a hoodie and a loose fitting pair of trousers. I think the film would have benefitted more from showing more of the change progress instead of focusing more on set design which, in contrast, was incredibly creepy and extremely well done. Bite tries to embody the raw horror that radiates in Cronenberg’s The Fly but it doesn’t quite manage to harness its power and it struggles to lift its wings off the ground.

It’s not all bad though. Elma Begovic’s performance as Casey is great. She delivers her lines without seeming forced or over the top and in doing so does a great job to sell the desperation of her character. She subtly changes her behaviour as her ‘condition’ gets worse. She takes on a tick and her distorted body movements really help to uphold the fantasy of her degrading persona. Sadly the film is let down by the performances from the remaining cast whose efforts could have practically been phoned in. If they were able to match the level of effort given by Begovic then I believe that the film would have been that much more enjoyable. 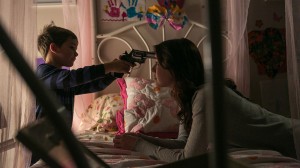 The penultimate film of the day saw a return to the Film4 Screen to catch the premiere of Michael Thelin’s Emelie. The premise of the film sounded very promising offering another creative spin on the home invasion subgenre.

In the film Sarah Bolger plays the titular character in this twisted tale of terror. After the Thompsons search for a last minute replacement for their usual babysitter they hire Anna, a seemingly innocent and good-mannered girl. After leaving their three children in her care the pair are unaware that Anna harbours deep-rooted psychological problems. As the night goes on the children begin to realise they are in danger.

Whilst watching the film it was obvious that there is something about Emelie that will delight genre fans. It’s slowly paced and takes the right amount of time to crawl under your skin before it builds a suffocating feeling of unease in its audience which, by today’s standards, is not by any means an easy task but with his efforts Thelin has almost perfected it.

In addition, the film is aided by a superb performance from Bolger whom as Emelie is so incredibly evil that I unintentionally laughed in shock at how deeply disturbed her character is. In this role Bolger is deathly chilling. She really carries the story and plays on every parent’s worst nightmare when leaving their children in the care of a stranger. After watching this film I think people will think twice when thinking of hiring a babysitter… at least I would. 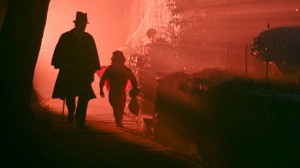 After a brief break it was time to enjoy the closing film of the festival which this year was Tales of Halloween. The brainchild of Axelle Carolyn (Soulmate), Tales of Halloween is the latest in a long line of anthology films and featured ten segments created by some of the hottest genre directors around at the moment including Darren Lynn Bousman, Lucky McKee, Neil Marshall and Mike Mendez.

Prior to the film Carolyn dedicated the screening to Wes Craven and the lights went down. At that moment images of jack-o-lanterns, trick-or-treaters, demons, axe murderers and ghastly ghosts filled the screen and I felt the same excitement I did as a kid when I was getting ready for Halloween.

Darren Lynn Bousman’s segment The Night Billy Raised Hell is simply delicious and a highlight of the film. It’s dark, hilariously funny and embodies the spirit of Halloween as demons and pranks collide. However, Paul Solet’s The Weak and the Wicked, which incorporates elements of a Western piece, feels out of place with its slow pacing. It doesn’t quite sit as well with the rest of the segments and kinda throws the film off balance.

As the film progressed it was clear that not all was right here. There are some segments that were a pure delight to watch but then there were the odd couple of segments that left a disappointing taste marring the experience overall. This said, it was Mike Mendez who steals the show with his segment Friday the 31st.

Combining the ferocity of Friday the 13th with the slapstick comedy of Evil Dead 2 Mendez has crafted a segment which not only adds to the Tales of Halloween universe but it would stand equally as strong on its own. At the end of it all I did enjoy the film. I found it fun. It reminded me of the spirit of the season and it got me excited to celebrate Halloween.

So with the end credits rolled and the auditorium lights up the only thing left to do now was to head over the Phoenix Artist Club for the famous closing night party.

Want more? Here are links to our other Film4 FrightFest Day 5 coverage: