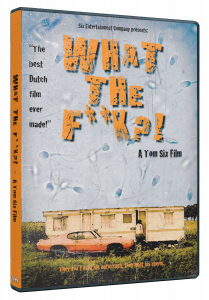 Synopsis:
Impoverished couple Freek (René de Wit) and Teuntje (Rikkie de Wit) are desperate to have a child but unable to conceive due to Freek’s infertility. Their rising urge to parent peaks when Freek kidnaps Dutch pop sensation Dries Roelvink in the hope that he will copulate with, and impregnate Teuntje, but complications arise and Dries refuses to mate without a fight.

Against popular belief, the marvellously warped film-maker Tom Six (The Human Centipede trilogy) didn’t begin his career by simply sewing mouths to anuses for our dubious viewing pleasure. From 2004-2008, Six directed three films prior to the bad science antics of Dr Heiter, Martin and Bill Boss. What the F**?! was the last of his pre-Centipede productions (following Gay and Honeyz) and marks a significant swerve into even stranger terrain for the wild-eyed Dutch auteur. WTF?! is a fun, frenetic, exquisitely twisted and gutsy kidnap comedy with a curious edge. It is also adorned by a matchless enthusiasm to embrace the bizarre and anarchic. Six leisurely unleashes radical humour with a roguish verve, ensuring comedy permeates the darkest scenarios: a common trait that also runs through his later (more disturbing) work.

Even though the central concept may initially seem baleful, Six resists veering into the excessively demented avenues he would later blithely amble down in the Centipede films. Yet WTF?! remains ecstatically mad and shamelessly entertaining. Protagonists Freek and Teuntje are damaged, deluded, specked with complexes and totally down on their luck, but they are only monsters on the surface, or when driven to absolute extremes. Close ups of crusty toe nails being clipped and flicked, mayo drenched egg slurping/ consequent burping, elongated diarrhoea related monologues, multifaceted fart scenarios and scenes featuring vomiting into a dung encrusted john, are all captured in a manner that makes them seem like the heinous acts of a repugnant, lolloping sloth, but are detained in this light by Six to stir and sicken.

When it comes to their personalities, Freek and Teuntje are actually rather endearing, undeniably warped yes, but affable human beings, driven to extremes by devastating circumstances. It is Six’s ability to identify and mine humanity from his cast (via some fantastic performances from René and Rikkie de Wit and Dries Roelvink as “himself”) that makes his film-making skills so significantly undervalued by critics and general audiences. Those alienated by whatever’s discombobulating, should embrace the variation. 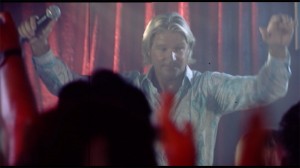 WTF?! opens on a wonderful high in a night-club with Dries belting his heart out to a sea of elated fans, but is soon thudded (by Freek) and cajoled to Teuntje in her dilapidated caravan of love. After meeting his super-fan assailants, Dries is subjected to their every abominable indiscretion and body oddity, until the couple disclose the reason for him being there. Freek puts stones in Dries’ shoes to stop him from running and when bungled escape attempts occur they often result in bone-cracking calamities, perpetual screaming from Teuntje, or fully-clothed, man-on-man mud wrestling action. Dries is forced to sing for the couple, against his will (using a beer-can as a microphone), share a bed with them while emotionally and psychologically disconnecting from the night-time fart shenanigans/ beneath the sheet competitions, to stop himself going insane.

The low-budget production value gilds WTF?! with a fitting, soiled aura that evokes the early, rugged work of Paul Morrissey, Jack Hill and John Waters, while jerking POVs and stifled sound design summons an equally apt realism. WTF?! inadvertently embraces the style that emerged from the American mid-seventies underground movement that the aforementioned film-makers were a part of. In a sense, it effectively captures the essence of that era more authentically than Tarantino and Rodriguez’s slick/ over-stylised Grindhouse homages, or the strain of paler imitations that followed them. This is probably due to WTF?! being the genuine article, crafted under similar constraints to the films that Tarantino and Rodriguez tried to emulate.

The story taps into Six’s exceptional/ irregular stance as an artist with a liberated imagination and capacity to yield outstanding humour, which is one of his most frequently overlooked and underappreciated qualities as a film-maker. It is too easy to be distracted by his commanding central concepts and the impishly deplorable imagery that parcels Six’s work, but cutting controversial comedy cackles at borderline subtext level, subtly like a venomous soup, serving second fiddle to the cracked visual antics. It is as equally discordant as the subject of his stories but genre fans with a glint in their eye and eclectic palette will find much to saviour. 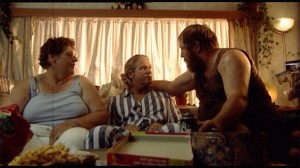 WTF?! is the type of tale the Coen Brothers could have possible crafted in their early days, with similarities to Raising Arizona reverberating throughout, but it’s festooned with the inimitable Tom Six twist. WTF?! remains as matchless and almost as disruptive as his films that followed it. Six capitalises on the absurd and derives humour from the repressed depravities of man. In lesser hands it could have easily ended up as an frivolous toilet humour laden multiplex plaguing abomination, but WTF?!’s wide heart shines through the revulsion while it flourishes into an inherently silly, sickening, jovial and suitably twisted kidnap flick. WTF?! has been released to the international market and a limited number of signed copies can be purchased here.