The New Poster for Don’t Breathe is a Scream! 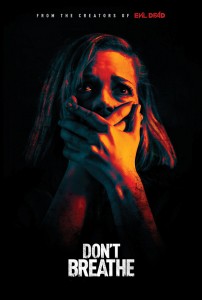 The first poster for Fede Alvarez’s follow-up to Evil Dead has been released and it’s a scream! Much like the title of the film suggests, the key is to keep as quiet as possible. Hence why the film’s leading lady – Jane Levy – is doing her best to keep schtum.

Don’t Breathe will follow a group of teenagers who hope to carry out the perfect crime when they break in to a blind man’s home.  It turns out that the blind man is an Iraq war veteran, so he’s not going to let the thieves get away so easily.

When speaking about his personal connection to the film’s storyline, director Alvarez said, “I come from Montevideo in Uruguay, a third-world country where we always grew up with a sense of no future. It’s not something unique to where I come from. It happens in many, many different places. The characters in this movie, the reason I choose to tell the story of thieves and people who break into houses is because they want to break away from that reality. Their motivation is something I connect with, which doesn’t mean their morals are what I connect with. But I understand where they come from.”