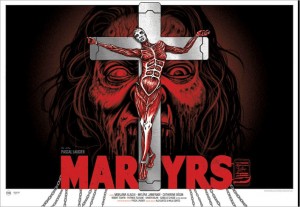 Synopsis:
A young woman’s quest for revenge against the people who kidnapped and tormented her as a child leads her and a friend, who is also a victim of child abuse, on a terrifying journey into a living hell of depravity.

French horror films are few and far between. From Brotherhood of the Wolf to Them to Calvaire to High Tension to Inside to The Horde. Covering different styles but generally loved by true horror fans and always full of the red stuff. Which brings us nicely to Martyrs.

Martyrs is almost two films in one. The first half playing as a revenge thriller and the second half runs more like a torture horror. But although both of those genres are full of average to poor films that just shock for the sake of shocking, Martyrs has much more to it than that. It will have you thinking throughout its run time and then stick in your mind for a long time after it has finished. Make no bones about it, this is a truly disturbing film.

The first half revenge takes no time to get going. There’s violence right from the off and it just never really lets up. The blood splashes across the screen and it all looks fantastic against an almost completely white and clinical looking set. Strangely, this first 45 minutes also features a J-Horror inspired part of the story, which works surprisingly well. The second half of the film is perhaps the hardest to watch as the torture scenes become more frequent and you’ll probably be wanting it to end sooner than it does. But the film never goes too far, going exactly as far as it needs to for the story it shows.

There are lots of things that standout in Martyrs and the make-up and visual effects are right up there with the best parts of the film. The cuts, bruises, wounds and scars all look horribly real. If the filmmakers hadn’t of got this right it definitely wouldn’t have had the same effect on its audience. And it’s not just the effects that look so realistic. Gunshots look as incredibly violent and painful as they should, cuts look deep and bloody and the beatings one character takes look brutal. All these elements makes it easy to believe that this film was pretty hard to make for the two main characters played by Morjana Alaoui and Mylene Jampanoi. It feels, even as actors, that they went through a whole lot while performing in this film. It’s a credit to their acting and the realism of the film that you think like this after watching Martyrs. Every type of horror this film shows an influence by and tries its own hand at is done to almost perfection. The revenge part creates plenty of sympathy for the victim, while still questioning the violent act they perform. The J-Horror influences come in the form of a long-haired dead girl that follows one of the main characters. This ghost-like image is instantly creepy and the tension built for these scenes is nicely handled. The blood and gore will satisfy even the most bloodthirsty horror fan, while the torture scenes are some of the most distressing you’ll see on film. 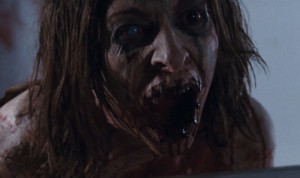 An excellent, creepy score is almost sparingly used but it haunts each and every scene it features in. Another, possibly overlooked element to how frightening this film is is the ordinariness of the people going about the horrible torture methods. They go by there day today duties like this is a normal 9-5 job they are doing. No emotion is shown and you can see this is one of the key things that effects the characters.

The ending is something that is talked about a lot when it comes to this film. It’s very open and open to interpretation but i honestly can’t think of any better way to end it. Not all films fit a definitive clean cut ending and i think Martyrs is one of these films. Leaving the viewer to make up their own mind and ask themselves questions not just about the film but life in general.

On first viewing, Martyrs will stay with you for a long time after it finishes. Even with repeat viewings it has a strange effect on you. Not just because of the torture and gore but also on subjects you might never have thought about before. I bet a lot of people will look up martyrdom after watching the film.

There is soon to be an American remake of Martyrs. I’m not one to complain about remakes, I’ll always watch them with an open mind but it will be one brave director to make it as uncompromising and harrowing as this original. This is a must watch for horror fans and one of the best horror films of the 21st century.